Share All sharing options for: Dom Pointer + the East is in the house: St. John's defeats UCLA, 66-63

The way they ended at UCLA, it wasn’t really to Coach Lavin’s liking. We played hard and won for him. - Moe Harkless, postgame

Revenge is a dish best served as a dunk.

Guided by D`Angelo Harrison's scoring bursts and tenacity, St. John's knocked off the visiting UCLA Bruins, 66-63, taking a measure of revenge for last year's loss at UCLA's Pauley Pavilion. No, Steve Lavin wasn't on the court to guide his new team to a win over his former employer. But Lavin watched from high overhead, even coming on to speak to the CBS announcers as his team attacked and rebounded their way to a gritty, hard-fought, intelligently played win.

Behind Harrison's scoring - 22 points on 7/19 shooting, with 8 rebounds and 4 assists - St. John's got a potential-scratching game from Sir`Dominic Pointer. Pointer was opportunistic, scoring 13 points, including two loud ones on an offensive rebound.

But the whole St. John's team was effective, quicker and hungrier than the Bruins. "I think we play scrappier than they do," Moe Harkless said after the game. "We played harder than they did. We just wanted it more."

The Red Storm led for much of the game, taking the final lead on a Moe Harkless free throw with 17:20 left in the second half. The Red Storm improve to 11-16, while the Bruins head back to Los Angeles with a 15-12 record. 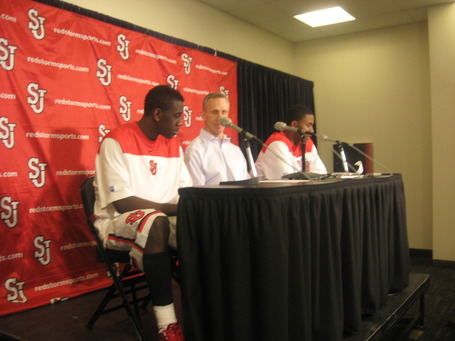 (The victorious: Pointer, Dunlap, and Harkless in the press room, after the game. Photo by Ray Floriani)

St. John's grabbed 19 offensive rebounds in the game (50% of their misses) - an almost unheard of number for the height/ size challenged squad. "We weren’t quick enough to the ball," Ben Howland lamented after the game. "They got the loose balls. They got the second shots. We held them to 37 percent shooting but it was those second shots."

The worst offense of those rebounds UCLA gave up was a tip-in with 6 seconds to go in a 2 point game, where Phil Greene flew by all the length of UCLA to gently knock back a miss.

Moe Harkless had 12 rebounds (6 offensive) to go with his 10 points, extending a number of possessions while battling a trio of 6'10 players in Travis Wear, David Wear, and Joshua Smith. Phil Greene was sharp late, taking advantage of soft UCLA defense after offensive rebounds to snake in for crucial scores. Amir Garrett's energy was crucial early; he had 8 points and 2 rebounds. Even God`sgift Achiuwa's defensive tenacity was on display; Joshua Smith only scored 6 points in the second half.

UCLA shot well inside the arc in the second half, but struggled to convert in the second against the undersized Red Storm. Tyler Lamb was effective on the drive and with the deep jumper for Ben Howland's team, scoring 18 - though he had 8 turnovers. And the Wears played solidly, with David dropping 13 and Travis scoring 11 with 13 rebounds.

But the Wears - and the Bruins as a whole - struggled to recognize attacking Red Storm players until they were driving into the paint. Worse still for the Bruins, they allowed the Johnnies to grab 15 offensive rebounds, allowing the home team to extend possessions - or, in the case of Pointer's nasty dunk or the tip-in by Phil Greene to preserve the lead late with 6 seconds to go - find scores when the offense wasn't working.

Kudos to Ben Howland for wearing the white sneakers in solidarity with Steve Lavin, recovering from his prostate cancer surgery. Howland helped Lavin locate his current team of doctors, and for that, Lavin (and the St. John's fanbase) is grateful.

Sir`Dominic Pointer is finding his game. A lot will be made out of Pointer's efforts this afternoon. He looked more comfortable, albeit against a UCLA team that played fairly soft defensively. Still, it was a hint at Pointer's potential - an all-around player, a slashing scorer with a jump shot, an opportunistic rebounder, and a lot of excitement. Pointer has a summer of development ahead of him, and I wouldn't be surprised to see him explode on the Big East next year.

It takes near-perfection [EDIT: in the non-shooting aspects of the game] to win. As the team currently stands, it takes an outlier effort to get a win if the Johnnies can't get out in transition; they're not going to suddenly shoot 50% inside the arc in halfcourt sets. The Red Storm shot 14/16 from the free throw line and played excellent defense in the post for much of the game. The Red Storm made the Bruins hurry with their pressure defense. UCLA shot .97 points per trip in the game - a good defensive effort from the Johnnies.

Tired legs are a real thing. The Red Storm shot 4/8 in the first half from outside the arc, got deep into the paint, and enjoyed a five point lead. In the second half, St. John's went 0/5 from outside the arc, allowed 9 offensive rebounds to the Bruins, took contested jumpers late in the game instead of driving, and fouled 9 times - including an inexplicable foul with 4 seconds left and the team up 4 points.