What do they call it on the streets? Posterization?

The first was a beautifully executed backdoor alley-oop served by Moe Harkless. The second was a foreseen tip slam off of a Harkless missed jumper. Whether you compare the two to one another or not, you have to admit that Sir'Dom has some serious hops.

With a six-man rotation, St. John's will always gladly accept an extra boost - a refill of energy to forget about the rigors of tiring legs. When someone brings the house down - not once, but twice in a six-minute span - your only choice is to be truly inspired.

And that is what Pointer's dunks provided the Johnnies during the second half of their victory over UCLA, 66-63, on Saturday afternoon. Their brother nearly pulled down the backboard under the bright lights of the Garden, and subsequently lit a fire for the young team.

More and proof of Pointer's alley-oop finish, below the fold.

Okay, fine. The UCLA Bruins completely forgot to guard Pointer on the weak side block. We get that. But his athleticism surprises us every time. You have to have pity on the defenseless rims.

Pointer isn't the greatest perimeter shooter this game has ever seen (ironically, he drained an NBA-range three-pointer as the shot clock expired during Saturday's first half), but, man, can he finish with authority. That has to be something you're born with.

As Harkless was looking to reset the Red Storm's half court offense, he saw Pointer all alone on the weak side. It was a solid reaction play from Harkless to recognize that there was no need to develop a set when the play was right in front of him. But, what was going through Pointer's head?

"Finish. That's all I'm thinking," he said after St. John's defeated UCLA. "All I had to do was jump. Jump really high."

Is it really that simple? If it was that easy, I wouldn't be writing about it and you wouldn't be reading about it. We'd be out there on some outdoor court right now practicing our alley-oops and tip slams. Oh, we can dream.

Pointer's second dunk, which came at the 7:51 mark as St. John's led 54-53, was a pivotal part of the game. Harkless' miss caused a vertical rebounding opportunity - one that Sir'Dom took full advantage of. He came out of nowhere, through blue uniforms to throw it down and give the Johnnies a three-point lead. 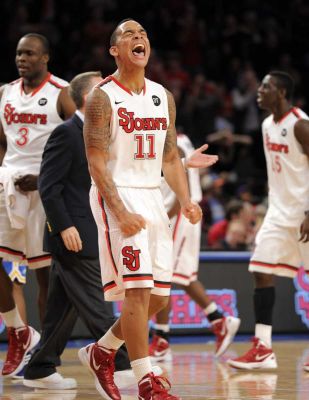 "It gets the whole team hyped and moved the momentum our way," he mentioned. "D'Angelo loves those kind of plays."

If the preceding picture tells us anything, it's that Pointer is truthful. D`Angelo Harrison, who is can exert confidence on the brink of any disaster, knows how important both slams were to St. John's and its cause.

"It made us get down in a better stance on defense," Harrison said. "Our energy really went up after that. [The tip slam] made me go crazy."

Quietly, Pointer may be the St. John's freshman who has shown the most improvement since November. There are still areas of his game, mostly offensively, that need patch-up work. He is beginning to fill up the stat sheet. Pointer has hit double figures in the Red Storm's last two games (12 and 13 points respectively, and only 5th and 6th time he's hit at least 10). His career high is 14.

"The coaches saw that I had been passing up a lot of open shots," he said. "They told me that it's not really helping the team that way. They said to attack and look for my teammates."

You might think of Sir'Dom as a completely defensively-oriented player. Back in the first ten games of the season, you wouldn't have been wrong. But as he's seen more floor time, he has become more rounded as a player.

As Pointer continues to develop, so will St. John's. He is 17% of the rotation, after all. Barring unforeseen circumstances, he will be a four-year player for Steve Lavin. If his freshman improvement is any indication, Pointer can prove to be a real asset for this program's future.