Share All sharing options for: BE Efficiency Margins, 2-20: UConn, USF struggle vs elite

Nearing the end of February, most of the Big East teams have found their level. The top is fairly clear, the bottom of the league is clear - with the Pittsburgh Panthers firmly entrenched in the bottom half of the league after an exciting, Tray Woodall-powered surge - and the middle still has to work itself out.

That middle features a team in Cincinnati that should be NCAA-safe (though we will revisit that safety after the South Florida game next Sunday), a South Florida team with a gaudy record but some bad losses, and a few teams whose performances have been middling-to-bad in the past 3 weeks.

Efficiency margins in tabular and visual form, along with notes on what the teams in the middle of the league standings need to do to get to the NCAA Tournament, including the curious case of South Florida, all for your perusal... after the jump. 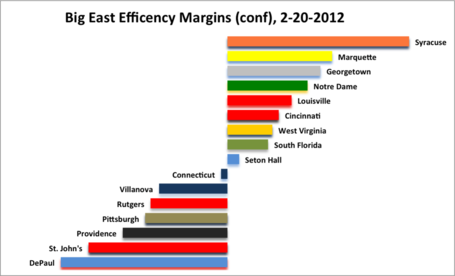 The West Virginia Mountaineers' losses at Seton Hall and St. John's and home to Pittsburgh could loom large for their NCAA Tournament fortunes. They have wins over Kansas State and Georgetown, a win at Pittsburgh, and chances for solid wins against at Notre Dame, home to Marquette, and at South Florida.

The Marquette and South Florida games could go either way; 10 Big East wins would be a much better position than 9 this season. But overall, the defense has been unreliable, and that leaves the Mountaineers to depend on a streaky shooter who no longer passes (Darryl Bryant), a 6'8" jump shooter without deep range (Kevin Jones), and a big man (Deniz Kilicli) who turns the ball over a little too much.

Still, the Mountaineers should be dancing for a round in March.

The Seton Hall Pirates have a favorable finish with no margin for error - a home game against Georgetown, home against the rival Rutgers Scarlet Knights, and away at DePaul. Both DePaul and Rutgers could conceivably win against the Pirates, which would sink their NCAA Tourney hopes - barring a dream run in the Big East Tournament.

With no notable wins outside of West Virginia and Connecticut, the Pirates could find themselves at 9-9 but on the outside of the NCAA Tournament anyway. Seton Hall's offense is the problem. Despite shooting nearly 36% on three-pointers in Big East play, the Hall have the second-worst offense in the league (second only to Rutgers. St. John's is 14th).

The Pirates struggle to connect on two-pointers, and don't compensate for their weakness like the next two worst 2-point shooting teams:

Providence gets to the free throw line frequently to get additional points, while rebounding their misses a notch better and turning the ball over less frequently. Cincinnati rebounds the offensive end well, and does not turn the ball over either (because the guards jack shots once they're in range, but that's another story).

Seton Hall has a real shot at the NCAA Tournament, but could use a Big East Tournament win or two to solidify themselves.

The Connecticut Huskies could win 3 of their last four to get to 9-9 in the Big East - which is usually considered solid ground for at-large NCAA consideration. The Huskies have played all five top teams in the league in the last month, and sport wins over West Virginia, Notre Dame, and South Florida.

Luckily for them, the selection committee doesn't consider margin of victory in their deliberations; if they did, the Huskies would be sunk. The loss to Tennessee was bad; but also as alarming is how the Huskies have been eviscerated in the Big East losses to the top-four teams.

Outside of the loss to Notre Dame and the team's two wins, U Conn has performed like a bottom feeder, averaging -21 points per 100 possessions in the losses. Only blowouts against Seton Hall and DePaul mask how large the distance has been between Connecticut and the elite teams recently:

To be fair, three of those losses are on the road; but the numbers are disturbing. For UConn partisans, anyway. The Huskies will need a surprising turnaround to avoid a losing Big East conference record, and this year, that's not NCAA-worthy.

Lastly, the South Florida Bulls' 10-4 Big East record has been built on the backs of some of the most disappointing teams in the Big East. They have to play the teams on their schedule, and they have performed well.

Still, in addition to their 7-6 non-conference record, the Bulls have to hope that the NCAA selection committee looks favorably on the team's injuries, that the bubble that breaks the right way for them, and for a win or two in the Big East Tournament.

The Bulls struggle to score, and when faced with the league's best - Marquette, Georgetown, and Notre Dame - they have lost by whopping margins:

Again, those three big losses are away. South Florida lost by only one possession at home to Connecticut. Still, those numbers don't give much hope for signature wins over Syracuse and Louisville. And West Virginia and Cincinnati are better than the teams South Florida has beaten. This could be a tough - and eliminating - four-game stretch. Even at 10-8, South Florida could be left out of the NCAA Tournament picture.

But if South Florida can win two of those games? They could make the NCAA Tournament, but will want a win in New York at the Big East Tournament to make sure they are in the conversation.