Youthful Red Storm learning how to close out wins

Share All sharing options for: Youthful Red Storm learning how to close out wins

The "Fresh Five" is maturing by the game, by the minute, and by the second.

DePaul just wouldn't go away. It was like a relentless child pestering his parents for cotton candy at the fair. The six-man assembly had to fight for every point and every rebound, until the buzzer sounded and the fight was over. For this young group, that kind of test is far more beneficial in the long run.

As their inaugural season at St. John's has progressed, these kids have slowly uncovered the steps of a necessary process - how to win close games. No, they haven't mastered it. Who has? But the key to the puzzle is that now, they've been there before.

Exactly a month ago, on January 21st, St. John's held a 60-50 lead over Villanova with 6:30 left. We all remember the story. The Wildcats finished regulation on a 17-7 run, took momentum into overtime, and pulled out a much-coveted Big East road win.

Since that day, Villanova has won only one game (a home win over Providence) out of seven. They're not exactly Syracuse, Marquette, or even Notre Dame. There is no precedent that says Jay Wright's young team is capable of maintaining those performances.

Thus, it can be concluded that St. John's had no excuse for letting one get away on that Saturday afternoon. A few crisper offensive possessions, trips to the free throw line, and sound defense puts that one in the bag.

Instead, in between the time of the 10-point lead and Villanova reaching equilibrium (less than four minutes), St. John's didn't convert a field goal in eight possessions and turned it over four times. Possessions were either hurried or overly passive. The balance that had got them the comfortable edge was gone.

On Saturday against UCLA and Monday against DePaul, the Red Storm looked like a different team down the stretch. A month later, they looked like they knew what they were doing and weren't afraid to seize the opportunity.

Aided by inefficient offense from the Bruins, St. John's pulled out a game that was tight from wire to wire. There wasn't anything beautiful or template-worthy from how they won. But, unlike the wins over Lehigh, Fordham, Texas Pan-American, and Cincinnati, the Johnnies finally went out and got one. It didn't feel like another remake of "The Great Escape."

The Red Storm put the Blue Demons away with a different method. In the final minute, the young team showed smart basketball instincts by finding their best free throw shooter, D`Angelo Harrison, on two key possessions. Harrison made three of four attempts, which proved to be enough to seal the game.

"My teammates did a great job getting me the ball because I shoot the highest percentage," mentioned Harrison after the game.

He's right. It's common sense, really. When you know the opponent is going to foul, you should give the rock to the surest shooter. For the Red Storm, that man is D'Angelo. 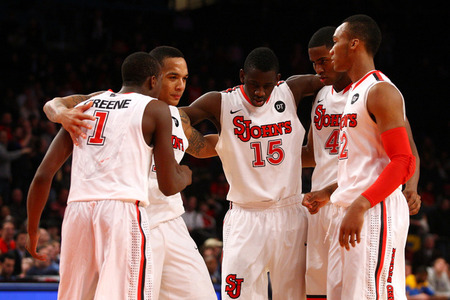 So, what do these two wins tell the world? You might say that St. John's finally got to face some reasonably beatable opponents. That's true, but they still needed to get it done on the court. For the 11th and 12th times this season, they did.

"We just have more experience. Each game is challenging and is a learning experience," Harrison said. "We wished we could have closed out some of the games earlier in the season."

Sometimes being successful, not only in basketball but in life in general, requires a balance of talent, experience, composure, and maybe a bit of luck. The Red Storm has been able to utilize all four in its two most recent victories.

Yes, I just mentioned 'Red Storm' and 'experience' (not the lack thereof) in the same thought. Am I the first?

St. John's is beginning to find out that you need to lose to learn how to win. It's frustrating as it occurs, but advantageous in the long run. By the time they become sophomores and juniors, they all would have been there.