The second to last efficiency margin post is here. The Big East's teams have separated themselves into four tiers:

Defense is the divider. The top eight can all defend in conference play, keeping opponents below 1 point per possession (or 100 points per 100 possessions, in the scale we use below). The bottom eight - including Connecticut - struggle on defense. The table, the visual representation, which teams need wins this week, Notre Dame's issue, and a note on South Florida/ Cincinnati, below the fold.

Data taken from Statsheet. You may want to read: An explanation of terms: stats + tempo-neutral terminology used on the Rumble, which will get a rewrite soon. Contact me and let me know what's unclear. The point is understanding, not obfuscation. 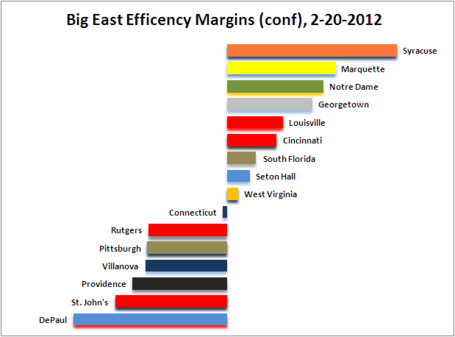 Seton Hall thought they had removed themselves from the bubble with a win over the Georgetown Hoyas. But a loss to Rutgers places them squarely back on said bubble. For a team whose non-conference wins aren't eye-popping, the only chance to feel secure in an NCAA Tournament bid will be with a win or two in the Big East Tournament.

The remaining schedule is DePaul on the road on Saturday, which doubles as a win the Pirates gain little appreciation for and a possibility for a bad loss against a feisty but frustrated Blue Demons squad.

Seton Hall is still in line for a single-bye. But West Virginia could take it with two wins and a loss by the Pirates, and Connecticut is also in line for a 9-9 record.

The Notre Dame Fighting Irish are the most three-point dependent team in the Big East, taking 40.4% of their shots from distance. The next most dependent team, Seton Hall, takes 35.3% of their shots from deep - closer to the rest of the league. When those threes aren't falling, as in Notre Dame's loss to St. John's this weekend, the Irish can struggle.

Still, the Irish do a lot of other things well on offense - sharing the ball (second in the league in percentage of assisted shots) and hitting two-pointers (third in the Big East), along with their defense, that it's not that they've been wildly exposed. And it's important to note that the Irish aren't actually a great three-point shooting team in conference, only connecting on 31.7% of attempts.

The South Florida Bulls and Cincinnati Bearcats played a game yesterday that looked like two tired dogs playing tug of war with a meat-flavored rope.

College freshmen were not alive the last time South Florida went to the NCAA Tournament, so for the Bulls, a win always has its aesthetically pleasing aspects.

But yesterday afternoon's game isn't one worth revisiting for feats of athletic speed. It was played at a pace Notre Dame would find plodding, featured a lot of missed shots, few transition opportunities, lots of jump shooting, and very few free throws.

Which was a great game plan for the large Bulls. Was yesterday a sign of the kind of growth that could get USF to the semifinals? It's only one game - though a huge win for the Bulls, one that puts them in real contention for a spot in the NCAA Tournament for the first time since 1992. But its a game where the Bulls counteracted their own tendencies and the Bearcats' tendencies to pull out the win.

Specifically, Cincinnati forces turnovers with their pressure defense, and South Florida is the worst team in the Big East at ball protection as a percentage of their offensive possessions, giving up the rock on 23% of their possessions. The Bulls held their turnovers to 17.6% of their possessions. Added to Cincy's avoidance of the free throw on offense, yesterday's game finished in what seemed like record time.