It's on their court. It's on our taxis.

For a few years, the Syracuse Orange athletic marketing department has been building its programs up as "New York's College Team." Jim Boeheim's teams have been contenders perennially on the national level. They've earned every right to call themselves whatever they please.

Sure, the city of Syracuse sits within the confines of New York state. Its residents adhere to Governor Andrew Cuomo. They follow the laws set by the legislative powers of Albany, equalizing their right to claim the state's athletic allegiances. Their proclamations aren't in violation of any rules.

So, why do all the advertisements, t-shirts, artistically crafted signs covered in orange irk all of those who follow the St. John's Red Storm? The slogan doesn't say "New York City's College Team."

But if you ask any St. John's fan, they'll tell you that it seems bothersome, that there's a deeper message that hits the wrong chord. The only way to undo the effects of their proactive marketing foray into New York City... is to win.

When leaving the Garden last week, I saw a taxi stopped at a red light. The advertisement on the roof caught my eye: 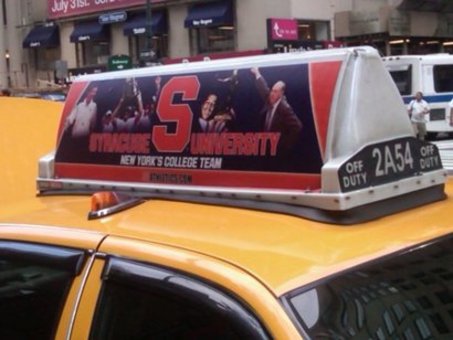 The taxi wasn't the first time I had ever seen Syracuse's aggressive effort to market itself in the city. Still, that doesn't sound right. Right outside the venue where St. John's plays its home games, a conference rival is displaying its brand, laying claim the territory.

Syracuse does have a large impact on the landscape of college sports in New York City. There are Syracuse bars in lower Manhattan filled with the thousands of relocated alumni and street signs that promote the school. Syracuse fans fill the Garden for their games against the Red Storm and in the Big East Tournament.

For St. John's fans, it isn't that Syracuse chooses to promote itself. It's where. It's how. And why.

Last season, Syracuse came to the Garden to play St. John's (and ran over the Red Storm). In the pregame warmups, Syracuse guard Dion Waiters came out of the locker room wearing an orange "New York's College Team" t-shirt and stood in front of St. John's students.

New Yorkers are smart and emotional. When something doesn't seem right, they identify it quickly. When something bothers them, they let you hear about it. And Waiters certainly heard about it. 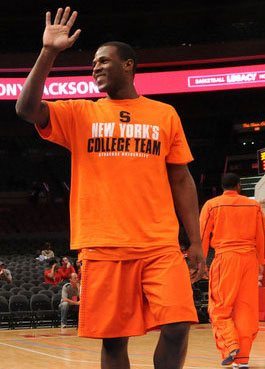 Waiters and his teammates were clearly trying to send a message. They were brashly, openly, and unnecessarily laying claim to the Garden - and New York City - as their own home territory.

Back up in Onondaga County, Syracuse's court at the Carrier Dome has an orange sideline in front of the scorer's table that says "New York's College Team" in bold white lettering. It's right there for anyone to see. They want you to see it.

The Syracuse Athletics website's St. John's preview says: "New York's College Team will be in action in Madison Square Garden on Saturday, Feb. 4 when No. 2/2 Syracuse takes on St. John's." The preview's picture? Boeheim's players huddled together, with the Empire State Building illuminated by the orange sky.

New Yorkers can read through the lines. This "New York's College Team" business is thrust into their faces.

"Syracuse is blatantly undermining our University and its fan base," a current St. John's student and season ticket holder told Rumble in the Garden. "Through the claim, they are utterly disregarding the tradition that St. John's has with New York City and Madison Square Garden. It says a lot that they need to try so hard to make things clear."

St. John's official rebuttals to the Syracuse campaign have been few and covert. The University handed out red t-shirts to students last season. The design, headlined by the outline of a skyline, is underscored by the words: "New York City's College Team." 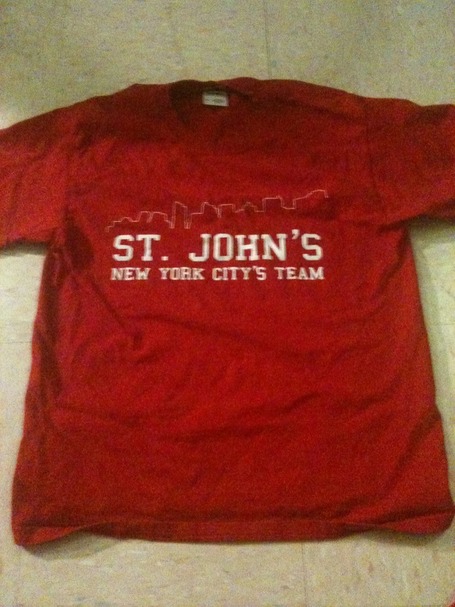 The shirt serves as a subliminal message to Syracuse, as if to say "You can be New York's College Team, but keep out of our city."

St. John's, who seemingly allowed the abbreviation "SJU" get away (St. Joseph's University has since copyrighted it), never thought to coin such a phrase in the 140 years of its existence.

The proactive marketing ploy that Syracuse has chosen to use is certainly effective, especially with their wins in Madison Square Garden. The Orange have been evidently better than the Johnnies for over a decade, and the inferiority complex has had plenty of time to gain steam, building the rivalry on the St. John's side.

"A couple of our guys have mentioned it to me," said Mike Dunlap on Friday afternoon. "Anything to spice up [the rivalry] is lively banter."

And old adage says you make your responses known through your actions. The only way St. John's can adequately defend its court, its arena, and its claim to the city is to beat Syracuse at Madison Square Garden. There is no way around it. The Red Storm has dropped three in a row to Syracuse on the Garden floor and six in a row overall.

"A win over Syracuse would be a statement win," mentioned Malik Stith. "We've been coming up short against teams of their caliber."

Tomorrow may not be the day that St. John's reclaims the nickname of New York's College Team; the Orange have been a top 5 team all season, while the freshman-laden Red Storm are just scratching their potential. But the fans are thirsty for a victory over the Orange from upstate, ready to paint the Garden red.