Last week, we delved into each team in the Big East Efficiency Margins for a half-season look. You should click on the link and give it a read if you did not to get to know a little bit about each team and the road ahead of them in the last month.

This week, we'll focus on the big movers: South Florida Bulls, the Seton Hall Pirates, the Pittsburgh Panthers, and the West Virginia Mountaineers.

Most of those teams have shown a precipitous and depressing decline... except for Pitt, who are going to sneak into the NCAA Tournament at this rate. Or will their yearlong flaw be just enough to keep them out of the Dance?

One note before we begin: Syracuse remains far and away the best team in the Big East. It'd be easier to pencil them in for a deep NCAA run if they rebounded better. They'll have a chance to show how good they can be when they face the Georgetown Hoyas and their stingy field goal defense and crisp defensive rebounding. The end of the Syracuse Big East season is a lot more challenging than the first half was. 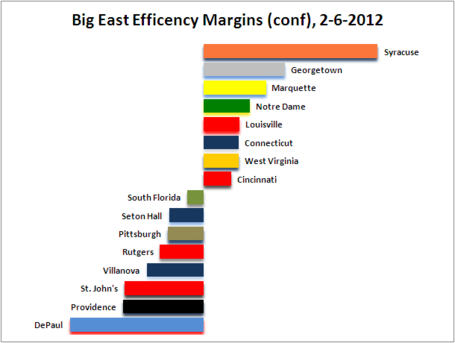 Meanwhile, the Pittsburgh Panthers are an entirely different team. In a four-game winning streak, they have stayed well above the 1.0 point per possession mark, keeping their turnovers and bit lower and making shots. With the exception of a clunker against Georgetown, Travon Woodall could make a case for Big East MVP - he apparently makes a terrible team great just by playing 30 minutes. I kid about the MVP, but the difference between Tray Woodall and his replacements is really amazing, and not having Ashton Gibbs on the ball is a gift for Jamie Dixon's basketball program.

On the stink side of things, West Virginia Mountaineers pulled out an overtime win at Providence, after allowing the Friars' Gerard Coleman - a player who can only shoot short jumpers, runners, and layups with any consistency - to reach a new career scoring high in regulation time.

The 'Eers allowed Providence to score 1.27 points per possession. In the last 4 games, teams have punched far above their offensive weight... except, curiously, for Syracuse. Huggins flipped his rotation between halves yesterday, removing Keaton Miles and Jabarie Hinds for Gary Browne and Aaron Brown. We'll see if that makes a difference.

The Seton Hall Pirates have lost 6 straight, and it hasn't been pretty at all. Herb Pope sat out the last game with an injury, Kevin Willard got tossed and remained frustrated after the game, and the offense is the worst in the Big East. Jordan Theodore is turning the ball over, and the team can't shoot.

The defense has been stout, except for an outing against Villanova. Interestingly, the Pirates. despite playing good defense, aren't dictating pace at all - playing slow games against South Florida and Notre Dame, and getting into 70 possession games against Villanova, Louisville, Marquette, and Connecticut.

The Pirates get two games against the free-fouling, poor-scoring Rutgers Scarlet Knights, a secong game against DePaul, and a home matchup against St. John's, who struggle to score early and struggle to rebound.

Marquette and Georgetown may be two of the best teams in the league. But the South Florida Bulls' offensive performances have been disquieting - offensive efficiencies of .73 and .69 points per possession, respectively. That's REALLY bad.

There's nothing wrong with a team that beats the teams its supposed to beat, and loses to teams that are better; but the variance between the Bulls' offense in wins and in losses is stark - 1.17 points per possession in wins, .82 points per in losses.