If you found that frustrating, it sounds like you're eligible to join the Thaddeus Hall bandwagon. The senior 6'4'' shooting guard from Thomas Jefferson High School (Brooklyn) hits three pointers from the concessions and never relinquishes the smile that has defined his high school career, despite some rough years in his personal life.

Hall, who scored 22 points in Jefferson's 72-68 PSAL semifinal victory over Wings Academy on Saturday, holds all the intangibles you want in an offensive threat. He uses his ability to knock down perimeter looks to open up the dribble, where his speed kills.

Hall's five clutch points in the final 7.7 seconds of the game catapulted the Orange Wave into the PSAL final, which is set to be played next Saturday at Madison Square Garden. 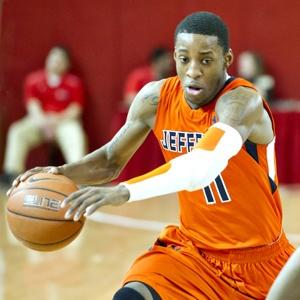 As the New York Post's Zach Braziller elegantly wrote on Saturday, Thaddeus has had to overcome bouts with poverty and poor grades throughout his young life. As a result, questions have arisen about whether Hall will be academically eligible to play college basketball in the fall.

Steve Lavin isn't afraid of the risks of academically unstable student-athletes. He knows that the rewards are well worth the hazards. And, with Thaddeus Hall, he may just take that chance again.

With Saturday's news that Moe Harkless may be leaning towards entering the NBA Draft, the Red Storm may need to replace a large percentage of scoring from this season. Lavin continues to reiterate that the 2012 recruiting class is "taking shape."

Hall was offered by St. John's earlier this month after the staff watched one of his PSAL playoff performances. There are rumors that Hall may need to enroll in prep school for a full year before becoming eligible to play Division I in 2013. Either way, St. John's knows that there may be a stud in the making in Thaddeus Hall.