How I pick an NCAA Tournament bracket

Share All sharing options for: How I pick an NCAA Tournament bracket

It's Monday morning, and like many Americans, I am at a desk, looking up information on college basketball teams that I have only a passing familiarity with. I'm giving up the chance to get ahead on my work, being unproductive on my company's time, filling my brain with minutiae and trends, creating mental clutter...

It's March, it's NCAA Tournament time, and I wouldn't have it any other way.

Some brackets to print, discussion of the Rumble's bracket Challenge and a large Bracket Challenge SB Nation has put together with Yahoo!, some lines of thinking for putting together brackets... below the fold.

Before we get started:

First, get your (printable) NCAA bracket. You'd be surprised how many brackets aren't designed for printing. If you want times and records, you may prefer 2012 ncaa bracket times + records. Click to embiggen. 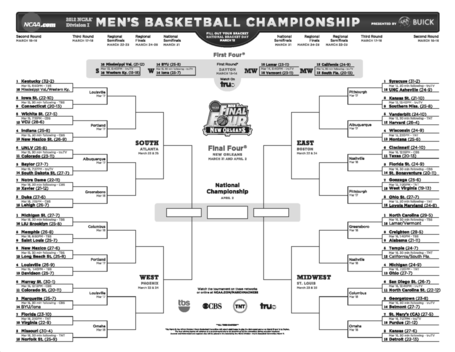 Second, join a bracket. I have one on ESPN and a few on Yahoo!; SB Nation is helping cover costs on the Rumble and other SB Nation sites through the Wisdom of the Crowds bracket. So check that out.

And we here at the Rumble have a Bracket Challenge with no money involved, just pride. All are welcome, the password is garden2012.

Third, stop worrying. It's kind of like dating - if you put too much pressure on yourself, try to hard, the results aren't great. Be yourself. Follow your dislikes. Acknowledge your hates. Then insert some logic.

For example, say you hate the way Kentucky does business with their one-and-dones, their loud tradition, their slick Calipari. That's going to work into your feelings about picking UK, and you might have valid points about a lack of experience. You've acknowledged your hate.

Now, add the logic. Kentucky has lost two games - the second in the SEC title game after which Cal - and Cal wished the loss would have happened earlier so his team could rest more. So don't knock Kentucky out in the first round. But in the Elite Eight? Even the Sweet Sixteen? Run with it.

After that, I go to the stats sites (sports-reference.com, statsheet.com, or kenpom.com if you have a subscription), and I look for:

Mind you, some of these tips get me wins... but I haven't won a bracket in years, unfortunately. And that's because there's no science, really; you're safe going with no upsets, and some team will come out of nowhere and illogically win a number of games. Maybe it's the Colorado schools. Or Harvard.

How do you go about picking your brackets? Which team will emerge from the field of 68 and surprise?

Yahoo! Tourney Pick'em supports SBNation and the best college sports tournament of the year. Join the bracket pools of Drew Brees, Michael Phelps, and Lil Wayne-- all while competing in the $5 million Perfect Bracket and $10,000 Best Bracket Sweepstakes. Be part of the best and biggest Yahoo! Sports tourney game yet – sign up today!