It was announced via Twitter at approximately 11pm on Wednesday night (first reported by Brian Snow of Fox Sports and Scout.com) that highly sought-after recruit JaKarr Sampson has committed to St. John's.

Sampson had committed to the Red Storm prior to the 2011-12 season, but recanted his intentions to join the team once he was declared ineligible in September.

Sampson, the 6'8" forward from Akron, Ohio and most recently of Brewster Academy, is considered to be key piece of Steve Lavin's 2012 recruiting class. In recent weeks, Lavin had been reiterating to his Twitter followers that a "stellar recruiting class" is taking shape.

Sampson is an incredible athlete who, though not overly bulky, does add size and length to a roster in need of both on the interior. It was believed that Kansas had been the favorite to land Sampson, as many college basketball recruiting insiders are calling his decision to recommit to St. John's "a shock." 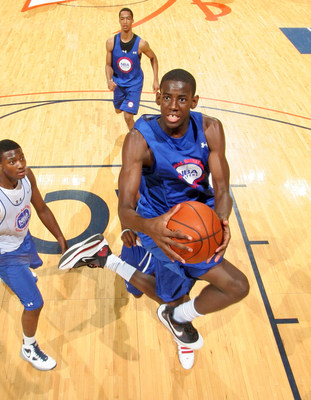 With Sampson once again on board, we can now be sure that Lavin was telling the truth about his class.

With the commitment of Felix Balamou from earlier this week, St. John's is beginning to put together a nice list of newcomers for next season. It is perceived that Balamou's decision to join the Red Storm could be a necessary step toward convincing teammate and solid shot blocker Chris Obekpa. Texas A&M transfer point guard Jamal Branch will be available in December. Players like Arlington Country Day's Carlos Morris are also recruiting targets.

The immediate future of the Johnnies will be heavily impacted by the upcoming decision of star forward Moe Harkless on whether to declare for the NBA Draft or remain in school for another season. Harkless' official decision is expected in the near future.

If Moe does leave, Sampson will be able to handle a large portion of rebounding and athletic post scoring that would be lost.

But, for now, the commitment of JaKarr Sampson is a huge development for Steve Lavin's continuing growth of the St. John's program.

Here is a recently compiled video that displays the natural talents and athleticism of Sampson: