Elite Eight: who the Rumble likes on Saturday, including Kevin Harlan

Share All sharing options for: Elite Eight: who the Rumble likes on Saturday, including Kevin Harlan

We've come to the near-end of the Tournament, the moment when one team gets to cut down the nets and come out of a region, proving themselves worthy of the Final Four.

How did we get here? Below, an updated bracket, a look at the paths each of the teams has taken, from Tim and a look at the Louisville/ Florida matchup from Pico. 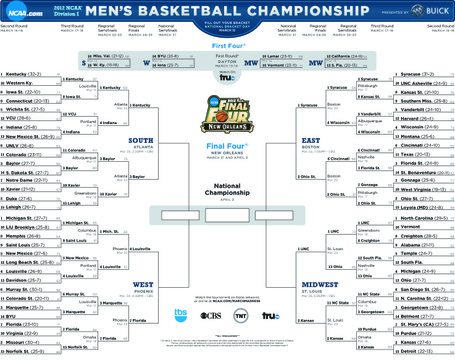 Tim, on the paths the teams have taken to get to the Elite Eight.

Looking at Florida's run in the tournament, you can say it was pretty easy. Virginia proved to be an easy task and then the Gators got luck facing Norfolk State in the 2nd round instead of Missouri. Marquette was probably their only real test, seeing as the Golden Eagles were a 3 seed, but the Gators did get the game with a 10 point win.

It's hard to say Louisville had the easiest of paths - not because the teams were tough, but more because they couldn't find their game and dominate. Only defeating Davidson by 7, then New Mexico by 3, Louisville could have been knocked out a lot earlier but they stayed strong and got an ever so impressing win over 1 seeded Michigan State.

Syracuse began the tournament shaky against UNC-Asheville, but put it together versus Kansas State and got a strong win. In the game against Wisconsin, they had a tough time handling the Badgers but escaped with a 1-point win to make it into the Elite 8.

Like Syracuse, Ohio State was up and down though the tournament. After beating Loyola (MD) easily, they had a bit of a tough time against Gonzaga but recuperated and got a big win against Cincinnati and moved into the Elite 8.

Pico: on the Florida/ Louisville Student vs. Teacher matchup.

Florida was a terrible defensive team in SEC conference play, allowing over 1.1 points per possession to the likes of Georgia, Vanderbilt, Kentucky, and offensively woeful Alabama. But before that stretch, Florida played decent, though inconsistent defense. Given the state of the bottom half of the SEC, one can be forgiven for brushing aside those results. And the quality of the first two NCAA Tournament opponents wasn't impressive. But Billy Donovan (the former Rick Pitino player, assistant coach) apparently has a team that can crowd a very good Marquette team into under 1 point per possession.

On the other side, Rick Pitino (the mentor) has taken a sometimes sloppy squad and reeled off a string of 11 game where his opponents are held under 1 point per possession. It's not about the turnovers, either. It's been about keeping the opponent from getting transition attempts from Cardinals' turnovers and simply stifling the other team from outside of the arc.

In that stretch, the Cardinals lost three games where they allowed 38% shooting or higher outside of the arc. In the other games? Louisville has held three teams to under 16% shooting from beyond the arc, and held four other squads under 24% shooting. Yes, the Cardinals' offense hasn't been dominant. But the defense has taken up the slack.

Teams are either hitting shots from the outside or not, and that's going to be the key for the Gators this afternoon - even though Florida has won without those shots falling.