Moe Harkless and D`Angelo Harrison were recognized on Sunday for their hard-fought efforts in their inaugural season with the St. John's Red Storm. Both freshmen were named to the Big East's All-Rookie team, while Harkless was commemorated with All-Big East Honorable Mention accolades.

Harkless, who averaged 15.2 points and 8.5 rebounds per game this season, has been the Red Storm's stable force throughout the team's 31 games. Harrison, through his contribution of 17 points, 3.7 rebounds, and 2.1 assists per game, often served as the spark plug for an offense that periodically struggled.

The 2011-12 season in Queens was labeled by continual development in hopes for a bright future. Harkless and Harrison were right in the middle of the action, both often playing 40 minutes each game, for a squad that played with a lean six-man rotation since early February.

Finishing the season with a 13-18 (6-12 Big East) record, the St. John's "Fresh Five" had smiles few and far between during their freshman campaign. After being heralded with Big East awards on Sunday, Moe Harkless and D'Angelo Harrison definitely have something to smile about.

Harkless and Harrison were equally as important to the Johnnies' efforts this year, but for different reasons. Harkless allowed the undersized St. John's squad to compete on the boards against much larger Big East teams, while giving his team a steady level of production offensively. 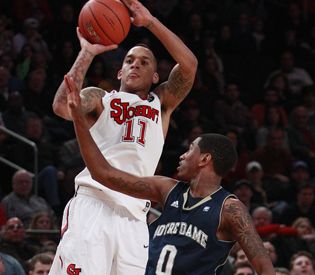 Assuming that the Big East Rookie of the Year Award is between Harkless and Harrison, who should win?

"[D'Angelo's] had an outstanding year. He broke the freshman record easily," Harkless mentioned. "If he got the award, it would be an honor for me as his teammate, the team, and the school."

"I think it's easy. [Moe] has played really well and should probably be on one of the All-Big East teams," said Harrison. "Moe is a very good player and he should easily win it."

You can really make an argument for each freshman to win the award. Harkless was one of five players in the conference to be recognized with Honorable Mention honors, falling just short of one of the three all-conference teams. As the only freshman commemorated with anything other than the All-Rookie squad, it leads us to believe that he is in fact the front-runner to become Rookie of the Year when the award is announced Tuesday.

"Moe and D'Angelo are clearly deserving of these Big East honors," said Steve Lavin. "These young men have demonstrated the ability to persevere through the rigors of the Big East season. The Johnnies' future is bright with our 'Fresh Five' and company as its core."

Harkless and Harrison were joined on the Big East All-Rookie team by Andre Drummond of UConn, Chane Behanan of Louisville, Jerian Grant of Notre Dame, LaDontae Henton of Providence, and Anthony Collins of South Florida.

Harkless was announced as All-Big East Honorable Mention alongside Cleveland Melvin of DePaul, Hollis Thompson of Georgetown, Kyle Kuric of Louisville, and Ashton Gibbs of Pittsburgh.

The 'H&H Boys' were the only two of the six-man St. John's men's team to be honored by the Big East, but the women's squad was recognized in a big way. Women's head coach Kim Barnes-Arico was awarded with the Big East's Coach of the Year Award and Da'Shena Stevens was announced as the conference's Scholar Athlete of the Year. A warm congratulations are in order for Coach Barnes-Arico, Stevens, and the rest of the St. John's women for another great season.