Share All sharing options for: St. John's to face Pittsburgh in Big East Tournament first round

The St. John's Red Storm (13-18, 6-12 Big East) are slated to play the Pittsburgh Panthers (16-15, 5-13 Big East) in the first round of the Big East Tournament. The game, which will be played Tuesday afternoon at 2:30 and televised on ESPN2, will be the second meeting between the two teams in just seven days.

St. John's fell into the conference's 12th seed on Saturday night after its 61-58 loss to Rutgers in Piscataway, NJ. If the Red Storm had beaten the Scarlet Knights, they would have captured the 11th seed and faced off with Villanova on Tuesday night instead.

The youthful Johnnies squad, headlined by five freshman and a first-year JUCO transfer, has officially finished its first full regular season. It was a campaign of a few ups and many downs, but one that certainly puts the program into a better position going forward. Expectations were never exceeded. The season went almost exactly as anyone could have knowledgeably predicted.

But this team thinks that you should believe in them this week.

"We're six deep, but we play with heart and we're going to give it everything we've got," said Phil Greene on Monday. "Sometimes teams look at us and take us lightly, but when they do that it puts an extra chip on our shoulder and we come out even harder."

This upcoming week will be the Red Storm's last effort at showing recruits why Queens is the place to play in the future and why your excitement shouldn't falter. More, below the fold.

"Long time, no see" will most likely not be Mike Dunlap's first words to Jamie Dixon on Tuesday at the Garden. Heck, their colognes will probably even be familiar.

Familiarization. That's what makes 'Championship Week' so special. Conference tournaments may not have the universal win-or-go-home luster of the NCAA Tournament. But what it does have is team-to-team familiarization. Instead of seeing an opponent for the first time, every team knows everything about every other.

With St. John's and Pittsburgh, it reaches another level. It's rare that two teams ever play each other twice in one week. On Tuesday, the Johnnies and Panthers will, with the same players, same coaches, same managers, same trainers. Same everything.

This time around, the stakes are higher. For two programs that have had disappointing seasons, the Big East Tournament marks the final opportunity for bragging rights and maybe even a positive vibe or two. Two of Pitt's key contributors, Ashton Gibbs and Nasir Robinson, will play in their final Big East Tournament.

When the two teams saw each other last, in Pittsburgh on Wednesday night, the Panthers ran away and won easily. Once Moe Harkless went down with an ankle injury, St. John's never had an answer to the constant punches by the Pitt offense. 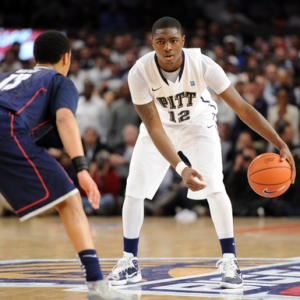 "Pittsburgh did a great job on the boards and obviously that was glaring," said Dunlap. "We were just awful defensively in that game in terms of our effort levels, which is unusual for us."

He's right. St. John's defense has been improved in recent games, as opposed to earlier in the Big East schedule. The three-game winning streak of late February started with limiting the damage created by opponents offensively. In last week's meeting, Pittsburgh scored 89 points on a stifling 63.3% shooting.

After any loss, especially a 20-point loss, any team would love an opportunity for immediate revenge. For St. John's, this is just about as immediate as it's going to get. The Johnnies have had some Garden magic in recent weeks, with exciting wins over UCLA and Notre Dame. Tuesday will be the first time Pittsburgh comes to the Mecca to face the Red Storm since Dwight Hardy's heroics of last February.

If St. John's were to defeat Pittsburgh on Tuesday, its awaiting opponents would be Georgetown on Wednesday and, god forbid, Cincinnati on Thursday. No one is expecting the Red Storm to make a significant run with a six-man rotation, but it would be uplifting for this young group to grab at least one victory on the Big East's brightest stage.

"Why not? It really comes down to if we are able to get the guys up to it," Dunlap said. "Inserting Coach Lavin back in [practice] here today was a great pop for us."

I'm not underestimating a little Lavin inspiration. Are you?