That's how you make a first impression.

Moe Harkless was recognized for his stellar freshman season on Tuesday, being named as the 35th recipient of the Big East Rookie of the Year award. He averaged 15 points, 8.6 rebounds, 1.6 steals, and 1.5 blocks per game this year for the St. John's Red Storm.

Harkless became the second St. John's freshman to win the award since its inception in 1980. David Russell won Rookie of the Year in the first year of the conference, when the Johnnies went 24-5 under legendary head coach Lou Carnesecca.

Along with D`Angelo Harrison, the Queens product was announced as one of the six members of the Big East All-Rookie squad. UConn's Andre Drummond, Louisville's Chane Behanan, Notre Dame's Jerian Grant, Providence's LaDontae Henton, and South Florida's Anthony Collins were also recognized as stand-out freshmen. Harkless was also named Big East Rookie of the Week twice during the season.

Moe Harkless didn't average the most points among all Big East "diaper dandies" this season - that was his teammate, Harrison. But there is no denying Harkless' importance to a team that struggled with inexperience, a short rotation, and an absent head coach.

If you look at history, the Big East Rookie of the Year award is an extremely telling recognition. Harkless' induction into the exclusive fraternity puts him alongside not only some of the conference's greatest players, but some of the best in the history of the sport.

On Tuesday, Moe Harkless made possibly his last step from being "the kid from Forest Hills High School." He's now a part of this list of college basketball legends, NBA stars, and Hall of Famers. He's Big East royalty.

"I think it's easy," said teammate D'Angelo Harrison on the decision to name Harkless Big East ROY. "He's played really well this year. We need Moe in every game, no matter what. Moe is a very good player and should easily win." 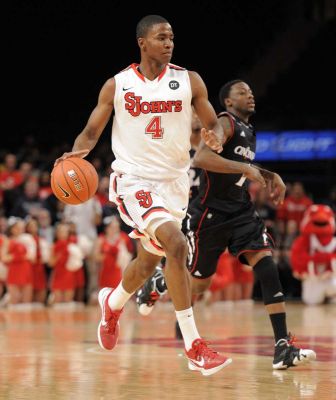 Harkless has impressed us - not just with his imposing dunks, smooth interior spins, or knack to rebound. Despite being new to college basketball, Harkless was well-rounded and steadily consistent from the first day we saw him at Red Storm Tip-Off in October. He was always head-and-shoulders above the rest.

"He rebounds, he blocks shorts, he scores," Harrison added. "He's the key to everything we do."

That's why this young man is receiving this honor today. Though Drummond, Behanan, Grant, Henton, Collins, and even Harrison have had instrumentally solid seasons for their respective programs, it's Harkless that took the role of the face of St. John's.

Pretty soon, he'll be one of the faces of the Big East.

Harkless scored an impressive 25 points and pulled down 9 rebounds in the Red Storm's 73-59 Big East Tournament loss to Pittsburgh on Tuesday afternoon.

The obvious questions that have been raised in recent months is how long Harkless will choose to play for St. John's. The expectation is that, whenever the time is, he will cut his collegiate career short and head into the NBA Draft. Red Storm fans can most likely take solace in the fact that their star forward will be around for at least one more campaign, but his future remains unknown.

There's one thing that is certain. We'll enjoy watching Moe develop for as long as we can. The fact that there is nowhere to go but upwards is enlightening for not only Harkless, but for the rest of Steve Lavin's heralded "Fresh Five."