In conjunction with Yahoo! Sports' Memorable Moments series, the SB Nation blogs are thinking back on the Olympics to think about our personal "memorable moments" (feel free to do so yourselves, by the way).

With this being a St. John's blog, we'd like to have that moment be an image from a former Johnnie.

Something like, say, the familiar Chris Mullin in 1984. Or a moment that is extremely dramatic, like Usain Bolt blowing away the field in 2008 in the 100m in Beijing, with time enough to swing his arms out and look back, showing just how through-the-roof the Jamaican sprinter's swag is.

But as I was writing this, I feel that a little love has to be given to Olympic silver medalist fencer Keeth Smart. Smart, from Flatbush and Brooklyn Tech (where a sibling of mine was a contemporary of his), won the silver for the team sabre event at the 2008 Olympics in Beijing (Hungary took the gold medal).

I can't say I know a lot about fencing.

But Keeth Smart and his sister came to an organization I volunteered with years ago, at the end of his fencing days. The kids weren't impressed; they knew little about fencing, and much more about hoops. But we wanted the kids to see that there were a range of options, a world of choices ahead of them. Just because a guy is from Flatbush didn't mean he couldn't fence, or leave the neighborhood, or go to college, or work in finance.

I watched Keeth Smart in the Olympics. I didn't tune into the parries an thrusts of fencing just for the New York connection, it was also for the knowledge that he was a man generous with his time and willing to speak to kids who wouldn't necessarily find him famous or transformative. And also because he and his sister were great guests, giving an exhibition, and giving a couple of kids a hands-on lesson kids a lesson in fencing.

I don't totally understand the scoring - there was no blood! There was no one knocked down! Just taps with the pokey end of a thin sword, a white mask being removed, and hushed commentary. But I rooted for Smart like he was neighborhood kin.

(All photos from Pico's private archives) 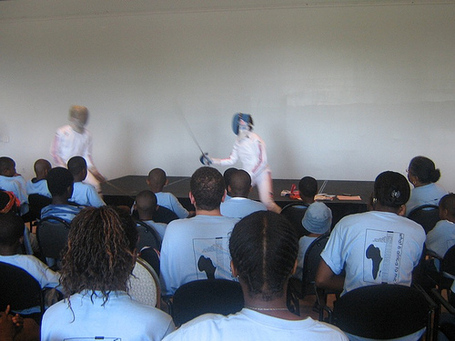 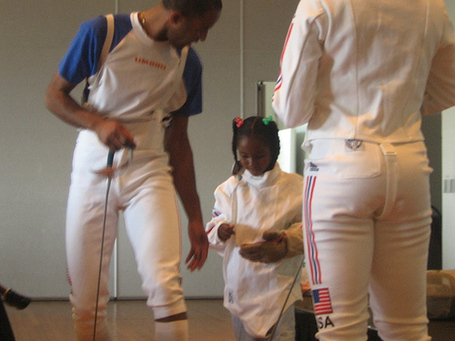 From the Columbia Journalist:

From an immigrant, working-class neighborhood where basketball is king and foils unknown, to the WASPy traditions and gentlemanly rules of what Erinn Smart calls an "old-money sport," the three black kids helped each other navigate two worlds and ultimately changed the face of American fencing....

The two boys had a simpler appreciation of fencing.

"I could hit somebody in the head and not get in trouble!," Lee says.

Keeth Smart would secretly think of himself as the new Luke Skywalker of Star Wars fame.

In addition to fencing, the three bonded while commuting to Manhattan as many times in a week as their friends did in a year.

"It was so cool to get to leave Brooklyn so often," remembers Erinn Smart. "That was an experience no one else got to be a part of."

St. John's and Olympic fencing still go hand-in-hand. Currently, St. John's fencing head coach is also the head coach of the US men's saber squad. Two St. John's alum fencers, Daryl Horner on the men's side and Dagmara Wozniak on the women's side, have also qualified for competition in the London 2012 games.

Celebrate the most compelling moments in Summer Games history with 'Memorable Moments' on Yahoo! Sports. Re-live moments such as Nadia Comaneci's perfect 10s in Montreal, Michael Phelps' record eight gold medals in Beijing, Carl Lewis' unforgettable four gold medals in Los Angeles, the spectacular success of the 1992 US Dream Team, Muhammad Ali in Rome and Atlanta, and any more!

These special moments are showcased through exclusive video, iconic photos, and stories on Yahoo!'s hub dedicated to the coverage of the Games. Enjoy the unique storytelling from Yahoo! Sports' award-winning writers and experts, as well as through the lens of Yahoo!'s users themselves.