The first of our Red Storm in review series covers God`sGift Achiuwa, and his contributions to the team's scoring in the post... and his struggles in the paint.

Share All sharing options for: Red Storm in Review 2012 - Gift and the glass

"The Johnnies' lack of a post presence was compounded by the so-so season turned in by 6-8, 236-pound junior college transfer God`sgift Achiuwa, who averaged 9.4 points and 5.6 rebounds, but promised so much more." - Tom Luicci, Lindy's college basketball preview

Not to toot our own horn... okay, I'm openly tooting. To expect some kind of "big things" from God`sGift Achiuwa was to not look at the mix of his junior college career and position he was asked to fill.

From last year's Rumble in the Garden Baselines preview of Achiuwa:

"It would be a miracle for Gift to be able to handle defending the post foul-free with no help, and no spells from other forwards. A tall walk-on who can defend well enough and absorb fouls would be nice. But the Red Storm will have troubles in the paint. They were already going to be a thin team inside. The loss of Norvel Pelle to ineligibility really hurts the post play.

"Expect God'sGift to see all the minutes he can handle. I'd expect some good activity, hard fouls, about 6-7 rebounds per game, 7-8 points per game, and hopefully some excellent position defense. But watching how the staff deploys Gift this year will be a study in coaching creativity."

Part of that guesstimate came from a first-hand scouting take on Achiuwa from Brad Winton of JUCO Recruiting, by the way.

God`sGift hit the predicted scoring numbers on the season, but was still underwhelming in Big East play for a team that was near the bottom of the league in interior defense.

Was it that he was asked to do too much? Can he be more for this year's Red Storm? 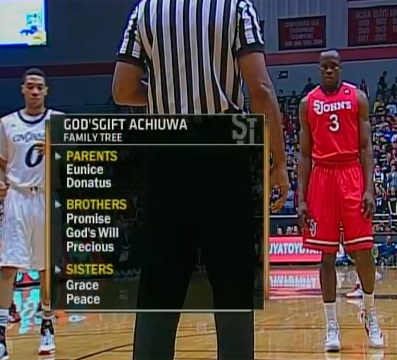 From the moment the forward from Erie Community College agreed to join the freshman-laden St. John's 2011 recruiting class, it was hard to ignore the presence of God`sgift Achiuwa - not for what he did on the court, not for his numbers, but for his name.

And what a name it was! The darling of preseason features, a name that invokes the appreciation of the gift of life and possibly hubris, if one thinks about it on a global scale.

And his physique! He was the most physically-imposing of the incoming Johnnies, chiseled muscle and bulging arms, the kind of player that could double as a defensive-back-crushing tight end if St. John's still fielded a football team.

By the middle of February, the graphic was more a curio than a helpful nugget. The Fresh Five lineup of Harkless/ Pointer/ Garrett/ Harrison/ Greene left Achiuwa on the bench for long stretches. Achiuwa didn't crack 30 minutes of time in the rotation until the final Pittsburgh game.

Considering he was the only true post player, and the rest of the team was five players, that vote of no-confidence was telling; his spot in the pecking order under Mike Dunlap was lost.

The positives: he was efficient, and Achiuwa knew his role.

On the plus side, God`sgift Achiuwa managed to defend without fouling out of any games. At times, he brought a solid scoring presence to the paint - but that presence was inconsistent for St. John's. He had a high in his Big East play of 20 points against the somewhat-small Marquette Golden Eagles, dropped 15 points against DePaul in a wild, running game, and put up 17 against Pittsburgh in the Petersen Events Center.

Achiuwa shot over 50% from the field through Big East play, even if it was hard to get the offense to him at times. He was solid on the offensive glass, helping the team battle for rebounds against bigger players. He was okay at carving out space under the basket. And as part of a team effort, he helped tip balls out to Maurice Harkless for rebounds credited to the now-NBA player.

His shooting percentage at the rim was 38th among Big East forwards in league play, but it wasn't terrible/ injurious to the Red Storm.

Gift knew that his offensive bread-and-butter was in the paint. Despite shooting 38% on jumpers in Big East play, he took more than three-quarters of his shots deep in the paint - 6th best in the conference among power forwards and centers. From baseline-to-baseline, few opponents can stick with him up the court; in a transition game, he has real value, provided he can finish his shot attempts.

The negatives: not impactful enough for a team without post players.

God'sgift obviously struggled to be the post presence. For a team that needed a truly impressive defensive post presence on a decimated roster, Achiuwa's was unable to rebound the defensive end, pulling down 2.6 defensive rebounds in 28 minutes per game. Maurice Harkless turned out to be the team's best rebounder inside (5.8 defensive boards/ game); but even with him, the Red Storm's defensive rebounding was among the worst in the country.

The shooting percentage allowed at the rim (64.4%) was second-worst in the conference in Big East play. It hurts when a team cannot keep the other team from second or third chances, and can't alter shots with an intimidating presence. A taller team practicing a tip drill will get the two points, given enough chances. Against St. John's, they got enough chances.

Achiuwa needs help... Gift needs help to create his offense. His post moves weren't great. On Big East broadcasts, former Providence coach Tim Welsh would mention that Achiuwa would take one dribble too many to get set up for a post scoring chance... and those shots would be blocked, or altered. In transition, he can be impressive. But on his own, he's not an offensively creative force. The dips in Achiuwa's stats are somewhat minutes-based, but he was less effective in Big East play.

...and hands. Physically, the issues aren't his speed, or his quickness, or his strength. And this isn't to say his skill set is shoddy; his game has good days and bad days.

But some game moments, one could see Achiuwa reach up to the sky, tracking a missed shot, and get the ball wrested from him by an opposing rebounder. Or one would see him fumble a pass. Or lose the ball on the way up. He drew some fouls losing the ball... but those weren't miscues forced by the defender, and that's not a recipe for success or consistency.

God`sgift Achiuwa will likely find himself pushed by players like Orlando Sanchez - who is versatile and able to rebound on a higher junior college level than Gift played in - and Christopher Obekpa, a very good shot blocker who will work his way into the rotation. JaKarr Sampson might demand time with his athleticism, and if Christian Jones can be a dirty-work player, he could replicate much of Achiuwa's production.

Still, Achiuwa returns with experience and showed the willingness to bang in the paint. Where he fits in to the team, and how many minutes he gets is up to his ability to find rebounds and make an impact in the minutes he gets with the new-look Red Storm.

* FTR - the ratio of free throws attempted to field goals attempted, to measure how often a player's actions get him to the line.