The Johnnies struggled to keep pace with opponents in the second halves of games last year. Can that change?

The Big East may not have been a scoring fest in 2013, posting the worst in-conference average scoring efficiency in five years (1 points per possession), but the Red Storm did their part to suppress scoring by allowing less than 1 point per possession, outperforming all but five of the other Big East programs. 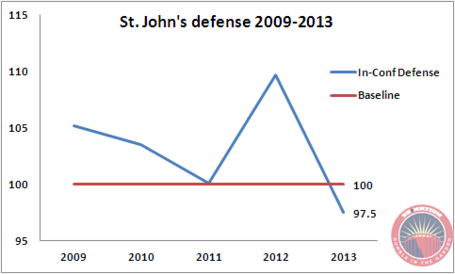 The rim was secure, shots were blocked, and opponents didn't spend time getting comfortable at the free throw line.

But the Johnnies still finished the year with a 3-9 record after a five-game winning streak placed them within spitting distance of the league's leaders.

Part of the problem - poor second half performances overall. The Red Storm was outscored by one point at the end of first halves, but lost another three points of ground in the second half and overtimes.

Starting with the first game of the Big East season against Villanova, the team was outscored in all but six second halves.

There are many reasons - again, poor shot selection, losing their composure at Notre Dame, some incredibly strong first-half defensive performances that would be hard to maintain - but a successful squad has to have the firepower to come out of the locker room, create good shots, and drop buckets in the second half. The best defenses have bad days; the offense has to come to the rescue.

The Johnnies did have a strong second half against St. Joseph's, scoring 1.2 points per possession to pull out the dramatic road win.

And the game against Marquette showed a glimpse at what could happen when the Johnnies had a chance to run.

But being outscored by an average of 6.3 points in the second halves of games in the final 12 contests? That has to change.

The maturation of the team - and keeping D`Angelo Harrison on the court - should help, as will the creativity of Rysheed Jordan, the shooting of Max Hooper, and interior presences from Orlando Sanchez, God`sgift Achiuwa, and Christian Jones.