St. John's vs Humboldt State stats: gaudy numbers all around

Big numbers for many of St. John's players, and a look at the positives of JaKarr Sampson's evening.

Share All sharing options for: St. John's vs Humboldt State stats: gaudy numbers all around

What do you take a way from a complete and thorough pasting?

It was an enjoyable watch, the kind of win where it's hard to finish the game because the outcome is never in doubt. For St. John's fans, even exhibition season last year left some nails bitten down and some nervous legs bobbing up and down in the chairback seats.

This was a satisfying win, and a chance for a number of players to work out the kinks. But do not think that Coach Steve Lavin feels this means his team is prepared for the size, efficiency, and cohesion of the top-20 Wisconsin Badgers in South Dakota on Friday night.

"There were some positives tonight," Lavin said. "I don’t think there are many coaches that are ever pleased with their teams’ performances at this time of year. We need to improve on all fronts but there are definitely some positives to build on."

Yes, he was watching the same game, the 106-39 throttling of an undermanned Humboldt State team. There was separation early and the chasm widened. 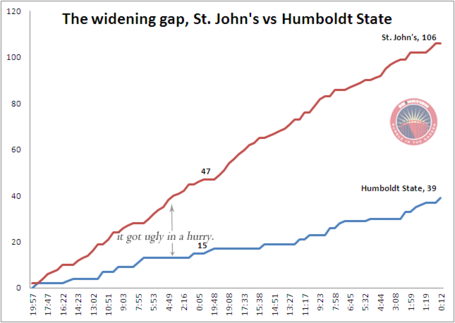 Stroker ace: Max Hooper (4/8 from beyond the arc)

Invited everyone to the block party: Sir`Dominic Pointer (9 blocks)

85/ 48/ 39. Once again, St. John's enjoyed a fast-paced game against the Division II Lumberjacks, fitting 75 possessions into the 40 minutes of game action. At the rim, St. John's connected on 85% of their shots; near and away from the rim but inside the arc, the Red Storm shot 13/27 (48%). Having watched the game, I'd say the official score keeper called many layups "jumpers", so take those numbers about styles of shots taken with as many grains of salt you can hold while scrolling this article.

We need to improve on all fronts but there are definitely some positives to build on. - Steve Lavin, post game

St. John's also shot 39% from beyond the arc on 28 shots. More threes were taken as Marc-Antoine Bourgault and Max Hooper used the garbage time to get some rhythm. Hooper was 4/8, starting with a pair of uncomfortable-looking misses.

29. Pointer played 29 minutes, mixing in some stints at forward/ center while handling the ball as the point guard. Experiments like that are the reason for exhibition games.

24. God`sgift Achiuwa dropped 24 points, hammering the Jacks inside like a power drill.

19. The Lumberjacks shot 19% from the field. Even against a Division II opponent, 19% is impressive defense, and the Johnnies were everywhere. Sir`Dominic Pointer had 9 blocks on the night, helping some of those misses out; by possession-based numbers, the Jacks scored .52 points per possession. St. John's scored 1.4.

Not a negative, but some have reached out to us to say they are unimpressed with the versatile Orlando Sanchez (2 points on 2/6 shooting, 10 total rebounds - 7 offensive, 1/2 from beyond the arc). Expectations may be high for the big man, but he seemed to do his job - he was athletic enough to get back on defense, could cover guards for short stints, and is a facilitator on offense.

JaKarr Sampson was much, much more aggressive, getting touches within 15 feet and looking to score, but only logged 11 minutes. He shot 3/8 for 7 points, and added 5 rebounds, but didn't look effective.

"Like a number of sophomores, [JaKarr] is still learning and growing," Lavin said after the game. "These first two games were instructive for him."

That said, one has to like that the staff is not letting him fall back on bad habits and easy-to get shots (transition jump shots from 18 feet); they're trying to put his athleticism to use by giving him options to get to the basket or shoot.

Wisconsin on Friday in South Dakota. Keep an eye out for our coverage leading up to the game.