A love letter from tempo-neutral statistics to you.

The Big East has four or five teams that should be NCAA Tournament locks in Syracuse, Louisville, Georgetown, Pittsburgh and possibly the Marquette Golden Eagles.

Outside of that group, Notre Dame, Villanova, St. John's, and Cincinnati vie for what will likely be two spots, with Connecticut, banned from postseason play as an APR penalty, playing spoiler.

Today, a look at two of the teams in the middle and a look at the team with the six game losing streak, and what might be the worst Big East offense since the 2006 addition of the Conference USA defectors.

Marquette gets the side-eye

A funny thing about those stat-skewing bumps teams get from playing the league's outliers.

While St. John's efficiency margins should take a hit this week with two of the Big East's most potent offensive attacks, Marquette got the other bump that happens when the schedule gives a week of DePaul and South Florida.

No matter where they play, both Oliver Purnell's and Stan Heath's teams make opponents look in the mirror and love themselves and their effort a little more, the basketball version of fresh kicks or a slick new outfit or a new hairdo.

Facing the Demons or the Bulls is a great time for the "toughness" and "rebounding" pep talks; because both of those teams have slim and/ or ineffective front lines, the talk is often Lombardi effective.

After all, DePaul played freshman walk-on Peter Ryckbosch for his size and toughness against Marquette, on a squad that sees Donnavan Kirk do very little in the box score week after week. He picked up four fouls in four minutes in the first half.

Marquette allowed DePaul to grab almost 40% of their misses (and allowed a 30% shooting team from beyond the arc to nail 45%). Normally, DePaul grabs 30%. Both the generally invisible Donnavan Kirk and the backup point guard Worrel Clahar had career highs in points.

Maybe it was a change in scheme for the teams languishing at the bottom of the Big East. But Louisville grabbed 58% of their own misses in the game before that, so maybe this is a real issue for the Golden Eagles heading into a week where they face Georgetown tonight on Big Monday and Pittsburgh on Saturday.

Second chances can really hurt in a close game... but Golden Eagle games must be exciting!

Meanwhile, Cincinnati has decided to ask mediocrity to the dance.

Their defense (allowing 97 points per 100 possessions) is decent, if mostly unspectacular - they're effective by limiting three-point shots and keeping opponents to one attempt per trip, and Cheikh Mbodj has 7 blocks in the last three games (okay, okay, five of those were against woeful Seton Hall).

But the offense consists of a lot of jacked up (43% of their shot attempts) and missed (29% of their attempts go through the net) three-pointers. Despite the shot-jacking, they do a decent job of getting to the line. But going 1/11 from three (Cashmere Wright, yeah, I see you) or 1/8 (Sean Kilpatrick, that's a "killa") is a problem.

The team actually cooled on the threes, taking 27% of their shots from outside the arc against Providence... but added an extra smattering of turnovers while struggling to score early in a 54-50 upset loss.

Is this rock bottom Rutgers?

Sunday's effort against Georgetown was better for the Scarlet Knights, but Mike Rice's team is at the bottom of the Big East standings in two-point shooting percentage (42%) and in free throws attempted (ratio of 26% free throws to field goals attempted).

Dane Miller is having a senior year to forget, scoring 5.2 points per game and adding 4.5 rebounds per contest in Big East play. Miller last cracked double digits in January in the Knights' win against St. John's and is taking 14.5% of the shots when on the floor - and turning the ball over on 32% of his infrequent possessions. He's a complementary wing who can't find a way to complement a guard dominant lineup.

Meanwhile, Wally Judge, Austin Johnson, and the rest of the big men struggle to make themselves effective as the Knights are mired in a six-game losing streak.

They're not half bad, to coin a term; but they struggle to keep pace with opponents in the second halves of games and aren't a balanced or cohesive (or good) offensive or defensive unit.

Rutgers is no South Florida, on pace for their worst offensive performance in Big East play.

If the Bulls keep it up, they would hold the dubious honor of having the worst per-possession offense in this version of the Big East.

Slow pace makes the offense look even worse than it is, but scoring 40 points in a regulation-length basketball game (against Villanova) is simply straight up terrible no matter how much air a team takes out of the ball.

They take 41% of their shots from beyond the arc - second most attempts per possession in the league - and hit 28% of those shots - worst in the league. And then there is the rebounding - they clear 60% of their misses, almost three percentage points worse than the next poorest rebounding team, DePaul.

It's not just the loss of Victor Rudd, who went 0/8 from beyond the arc in the two games before his groin injury. They're about as bad on offense with him on the court. Providence and DePaul are still to come, and who knows, maybe the offense will improve naturally.

The field goal defense isn't actually the worst on either side of the arc. The Bulls allow opponents to shoot 51% inside the arc (okay, that's not very good) and 32% outside of the arc (that's decent). And they do force turnovers on 21% of opponent possessions and don't send opponents to the line (32% free throw rate).

But those second shots allowed are killer, and that offense could only be salvaged (maybe) by Louisville's generally stifling defense - which may be the nation's best.

Data taken from Statsheet with supplements from kenpom.com. You may want to read: An explanation of terms: stats + tempo-neutral terminology used on the Rumble. Contact me and let me know what's unclear. The point is understanding, not obfuscation.

The Big East by won/lost standings, and with efficiencies in points per 100 possessions. Louisville has lost four Big East games - to Villanova by nine points, and the remaining three by a combined seven. Six of their seven wins have been blowouts. Which leaves us with a gaudy efficiency margin that raises an eyebrow.

The bottom of the league, however, is becoming pretty clear. 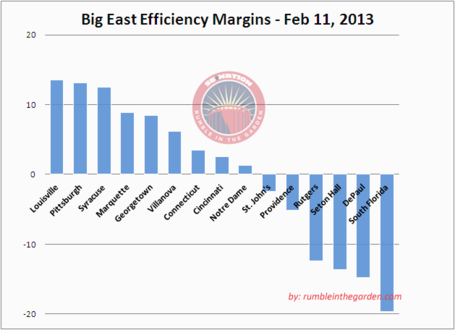