The Big East is a muddle. Let the magic of tempo-free statistics help you figure it out. (Or not. There are few answers in a parity-laden Big East.)

This is still a Big East with nine teams with no teams with fewer than three losses, and eleven teams with a chance at winning ten games.

Parity is exciting, but it also means that while Syracuse, Marquette and Georgetown are at the top of the standings, three games away are Villanova, St. John's, Pittsburgh and Connecticut with an outside chance at winning the regular season crown.

So much can happen in the last two weeks of the season, and the motion in the efficiency margin rankings can give a hint to team quality... but not which teams will scratch out the necessary wins to earn a top-four slot in the Big East Tournament. But in the numbers, there is a marked improvement in Marquette, a curious lull in Pittsburgh, an improvement in Villanova, and a look at what will be this year's Syracuse flaw.

In this topsy-turvy Big East, Buzz Williams' team was a squad that looked terribly lucky - a team whose offensive and defensive performances in Big East play were close (4.5 points per 100 possessions as of January 23rd). But they have developed on offense, increasing their offensive efficiency from 104.6 points per 100 possessions to 108.6 on average in Big East play as of today.

An increase in two-point shooting from 47% to 52% (best in the conference), and fewer three-pointers taken (down to 29% of their field goals attempted), along with a reduction in fouls committed have helped the Golden Eagles surge to the top of the Big East standings. While the offense is the second-best in the conference, the defensive efficiency is still in the middle of the league.

Villanova, battling to the bubble

Villanova stumbled to a 2-3 record to start Big East. And with a couple of wins over Louisville and Syracuse, Jay Wright's team started an ascent up the standings, also enjoying wins over three of the lower-tier teams and Connecticut. But the Wildcats need another signature win to get closer to an NCAA bid - and to signify that their offensive improvements (scoring 94 points per 100 possessions at the end of January to 99.7 points/ 100 as of today) are true.

Villanova has upped their three-point shooting in Big East play to 34% (from 31% in league play in January) and reduced their turnovers to 23% of their possessions (from 25% back in January). The Wildcats have also reduced their fouling rate to 41.5% of opponent field goal attempts.

The Pitt Panthers started Big East play with three losses in four games, but walloped Georgetown on the road, beat Syracuse at home, and played Louisville close in Kentucky. But what should have been a long streak has stopped at 20 wins overall and eight wins in the league. The Panthers still rebound the offensive end aggressively, but have improved their defense by compelling opponents to take 34% of their shots from outside the arc - and missing them. Opponents shoot 28.4% from beyond the arc.

But shooting 64.5% from the free throw line, and allowing opponents to get to the line at a free throw attempted/ field goal attempted ratio of just under 44% (2nd worst in the Big East) have been an issue... as has a pair of poor games on the defensive glass, giving up over 40% of their possible defensive rebounds to opponents.

Once again, Syracuse allows opponents to grab over 36% of their offensive misses.

Other than that? The Orange have been generally excellent, scoring and protecting the ball, while creating turnovers on over 23% of opponent possessions. They're excellent, but have struggled when the outside shots don't fall... and against the offensive rebounding of Pitt and Villanova.

Next: vs Georgetown today, 4:00 PM; at Marquette on Monday, February 25th

In honor of the last Georgetown/ Syracuse game currently scheduled, with both teams heading to new conferences in the next two years, we need to mention that the Hoyas have been steadily improving their efficiency margins, improving the offense and defense in the last month. The Hoyas have reduced their turnover rate slightly (to 21%) and are forcing miscues on 19.8% of opponent possessions - they were at 16.6% after January 23rd.

Opponents are now shooting 43% inside the arc (down from 45%). And on offense, the Hoyas are shooting twos slightly better (51.4% from 49.7%)... and attacking the glass more successfully, getting 31% of their own misses.

Wasn't there a flaw we mentioned about Syracuse? What was it...

Next: at Syracuse today, 4:00 PM; at Connecticut on Wednesday, February 27th.

Data taken from Statsheet with supplements from kenpom.com. You may want to read: An explanation of terms: stats + tempo-neutral terminology used on the Rumble. Contact me and let me know what's unclear. The point is understanding, not obfuscation.

This week's efficiency margins in table format - this time, ranked by margin not by won-loss record. 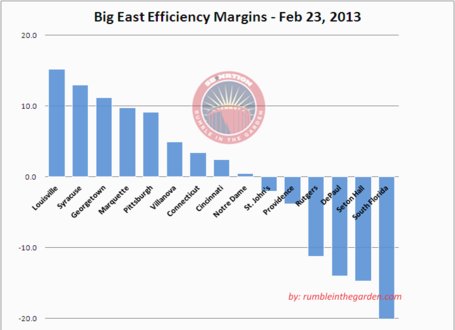