The standings are a mess, but some teams are looking more dangerous than others... while some teams are winning by the skin of their proverbial teeth.

In this last month of Big East play for 2013, we resurrect our look at efficiency margins - the tempo-free look at which teams are separating themselves from the pack, and which teams are a few bounces away from having a much lower standing in the Big East.

The Big East currently has eight teams with six conference wins, and the month of February will start to sort out the top of the league from the question marks- those who have enjoyed lucky bounces, and the teams that can't sustain their runs.

For once, the league has top-to-bottom talent, ands there is no clear-cut number one team running away with things.

Despite three league losses, the Louisville Cardinals is the leader in margin, benefiting from a 64-38 goring of the South Florida Bulls.

Fortunately for Pitino's team, they get to take their league-leading steal percentage (thieving 16.6% of their opponents possessions before they can get a shot) and stifling defense (.9 points per possession allowed) to face the eminently beatable Rutgers, St. John's South Florida (again) and DePaul in the next month, with a road test at Notre Dame the most likely hiccup.

But the Pittsburgh Panthers - a team that lost to Rutgers on the road and Cincinnati and Marquette at home - are in second place in efficiency margin after a 10-point win against the Syracuse Orange. Their toughest games are behind them, so expect a Panther win streak and narratives about the team "coming together" in February.

Jamie Dixon's club handles the offensive glass - grabbing 40% of their own misses, 2nd in the Big East - and shoots a solid 49% inside the arc (4th in the conference) while drawing fouls (free throw rate: 39.4%).

In the middle, St. John's and Villanova have young, defensively minded-clubs at fourth and fifth, respectively, in defensive points allowed per possession.

Defense is the must-have accessory for the well-dressed, well-coiffed coach.

Steve Lavin's Red Storm complement the difficult defense with the ability to defend without fouling (ftr: 28.6%, third in the BE) and by forcing turnovers on 22% of opponent possessions.

Data taken from Statsheet. You may want to read: An explanation of terms: stats + tempo-neutral terminology used on the Rumble. Contact me and let me know what's unclear. The point is understanding, not obfuscation.

The Big East by efficiency margins only. CLICK to embiggen. 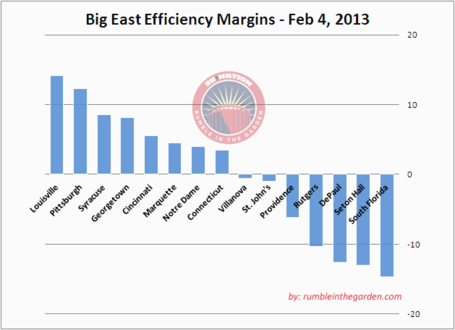