Big East awards from the writers who cover the games around the league with snark and elan.

Yes, the Big East has officially started putting out the all-league awards. And being the last Big East Tournament with so many of the bloggers that I have read, respected, and collaborated with over the years (since this site was The East Coast Bias five years ago), it's time to round up some of the available writing heads and poll them about who WE would give awards to.

I'd like to thank everyone who participated and wish our brethren covering Pittsburgh, Syracuse, Louisville, Cincinnati, Connecticut, Notre Dame, and Rutgers well, since St. John's will be in a different conference. We may dislike the teams, but we love the people.

And wishing them well does not cover this week of basketball, which will hopefully be epic - even if many of the players and coaches haven't had the free time we have to understand what conference they will be in next year.

If you need to skip around, here are the sections:

A wide open Big East means that there were a lot of surprise teams and players. Providence won the polling, but Georgetown, Marquette, and Villanova - two teams expected to muddle in the middle of the standings and one expected to be closer to the bottom - drew three votes each.

"Providence isn't a powerhouse, but their guard-led team put together a nice campaign to get to the middle of the league from the bottom last year and upset some heavies. " - Brian, Orange:44

"Providence really has gone under the radar because they aren't likely to make the tournament, but I've been impressed with what they've done approaching 20 wins. They've got wins over Notre Dame, Cincinnati, and two over Villanova." - Anson, Cardiac Hill

Cincinnati and South Florida earned most of the scorn, with Rutgers, St. John's,. Pittsburgh, and Syracuse catching some stink-eye.

"The one team that really sticks out is Cincinnati, who grossly underachieved in league play after a promising nonconference start." - Quinn, Rumble in the Garden

Dishonorable mention: South Florida. "I thought South Florida would not necessarily sustain what they did last year, but at least stay out of the cellar. "- Mark Ennis, Big East Coast Bias

In honor of this award, each coach gets a goofy blog named after them with slavish praise about how he can do no wrong.

On John Thompson III aka JTIII:

"Like Mike Brey, JT III is fantastic in the regular season. They both have been pretty awful come tournament season. But that doesn't take away from the job Thompson has done this regular season." - Jeff, Down the Drive [ed note: he won't be writing the "JT III tha Leadership Destroyer" anytime soon.]

JT III: "There is no doubt that JT3 is the hands-down coach of the year. The way the Hoyas ripped through competition in January and February speaks volumes to the job he did." - Quinn, Rumble

"JT3 changed the tires while the car was rolling this year, deftly balancing the Hoyas' ride after losing Whittington & blending in new talent successfully. Despite not having a first-team all-Big East performers, losing two of the league's best players & not replacing them with any flashy new talent, Buzz Williams' Marquette Warriors delivered an upside surprise once again." - Tim, Cracked Sidewalks [ed. note: I think they should start a side blog called "Reflections from Buzz' Dome."]

"Based on the Mike Brey principle, that COY goes to the coach of the team that far exceeds expectations, Cooley has to be considered." - Chas, Pitt Blather

"Kevin Ollie gets my COY vote over JT3 because no one had any idea what UConn would look like with no frontcourt and nothing to play for this year." - Jamie, Voodoo Five

Rookie of the Year: JaKarr Sampson

JaKarr and all of the rookie picks were regular starters, except for Chris Obekpa, who started 10 of his 30 games. 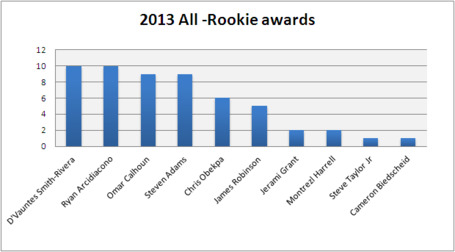 "Could it be anyone else?" - Dave, On the Banks

"You could make a case for Russ Smith or even Jack Cooley here, but I'm going with Porter since he's the top player on the conference's best team. And averaging a few assists and steals a game as a big man is icing on the cake. - Anson, Cardiac Hill

"They need him to play well and he has for virtually all of the 2012-2013 season. He's the reason Georgetown is pounding on the door of a Big East title and possible number one seed in the NCAA Tournament." - Mark, Big East Coast Bias

"He was going to be POY anyway, but the game Porter played at Syracuse was like his mic drop." - Jamie, Voodoo Five

"A bad game for Otto Porter still consists of about 15+ points and close to 10 rebounds. He is easily one of the toughest match-ups in the league." - Brian, VU Hoops 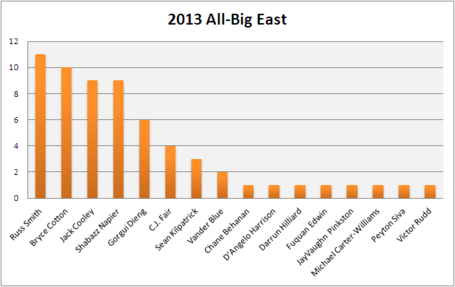 Cracked Sidewalks: "There was a lot of balance in the league this year among the top 15-20 players."

Orange:44: "I had trouble coming up with my final forward spot, but I think this list is solid and they have earned their places. Jack Cooley just squeaks in. Really, this has been a year for guards in the Big East and not much has impressed in terms of low post play."

Quinn: "I've seen much better All-Big East squads in recent years, but there's quality here. It may speak to why the league was so wide-open this year."

Homerism alert: Brian added Darrun Hilliard and JayVaughn Pinkston to his ballot. "I don't care, they've both been very very key to Villanova's resurgence this season and deserve a bit of love."

Michael Carter-Williams gets some love from Cardiac Hill. "He scores more than 12 points a game and leads the league in assists and steals. If that weren't enough, he adds about five rebounds a game."

Second place goes to Gorgui Dieng, who averaged 10 rebounds and 2.6 blocks per game - adding 1.4 steals per contest as well.

Player you hated to watch

Tie: Shabazz Napier (tagged with being destructive to other teams) and D`Angelo Harrison (tagged with being selfish/ whining; his being removed from the Red Storm squad late in the season has influenced voters here and around the league.)

Eight votes go to the five overtime thriller between Notre Dame and Louisville. And one WORST vote went to that same game - which was long, poorly played in stretches, despite being epic.