NIT 2013 Bracket breakdown - who are the contenders?

A look at the NIT participants by offensive and defensive efficiency, scouting the regions, and more.

Share All sharing options for: NIT 2013 Bracket breakdown - who are the contenders?

It's not as flashy as the NCAA Tournament, the land of big dreams that St. John's was hoping to stumble into after a suspension to the team's leading scorer and a rough February, but the NIT is the postseason, and a postseason tournament that people sometimes even watch.

And for those thinking St. John's would be the last team in, it wasn't even that close. The Johnnies come in to the tournament as a five-seed; all of the six seeds - Detroit, Ohio, Indiana State, and Washington - were at-large additions.

For NIT teams, a "mail it in" factor has to be considered. It's not the Big Dance. It's not what college players work so hard for, it's a consolation prize, a focus for jokes and derision by some of the fan base. And internally, a team needs players who want to beat the team across from them at all costs (and a coach who fosters that desire creatively).

For some teams, a win doesn't mean enough to get hyped for, to give the 100% effort for.

For that level of team, is the let down of playing in the NIT enough to distract them and give a less-talented squad a chance? After all, one reason we love basketball is that effort and execution is rewarded, even when there's a talent disparity. A number of lower-level teams worked very hard to win their conferences, and they come with experience, confidence, and a desire to pop their jersey in front of an ESPN camera.

And some high-level teams come with the needed focus to get to travel to New York for a title - even if it's not the one they've been dreaming of.

Consider some examples from last year, where Massachusetts knocked off Mississippi State and Seton Hall - two lackluster major conference teams with higher seeds (4 and 1, respectively) - and a solid Drexel club on the way to the NIT Final Four in Madison Square Garden. 8th seeded Bucknell eliminated 1-seeded Arizona in the first round. Middle Tennessee beat Tennessee in the second round. Two years ago, Gregg Marshall's Wichita State took out Virginia Tech on their way to winning the NIT Championship.

The NIT hardly goes chalk, but generally, decently talented major conference teams win. Wichita State (2011) and Dayton (2010) are the only winner from outside the "power" conferences in the last ten seasons, but Memphis and Tulsa won in 2001 and 2001, respectively.

Stony Brook: In terms of teams whose statistical profile hint "upset", consider the 24-7 Stony Brook Seawolves, regular season winners of the America East. With stout defense, deliberate pace, and the ability to protect the ball, they might test the fast-paced Massachusetts Minutemen. Iowa would be a stiff test in the next round. The Virginia region will be hotly contested, with three of the top five per-possession defenses in the NIT (and St. John's a very close seventh among NIT teams).

Of course, even adjusted per-possession numbers can be burnished by low-level competition, in the case of Stony Brook.

I'd predict Virginia coming through this group; if not them, Iowa.

Denver: While Maryland is more likely to come out of the region, Denver has some of the best ranking numbers in the Tournament, with an efficient offense and a stout defense. Maryland has NBA level talent, but sloppy talent; meanwhile, the Pioneers force turnovers at one of the highest rates in the country. Will that translate against an ACC foe? This may be Alabama's bracket, but the Crimson Tide's defense-first, defense-only style could put them at risk for an upset against a team that also likes to D-up. Stanford is dangerous in a Pac-12 that's better than the selection committee thinks, and they could eliminate Alabama

I'd predict Denver coming through. If not them, Maryland.

By the numbers, this is the most lackluster bracket. Does Washington have anything left in the tank? Does Washington HAVE a tank? The same goes for the thoroughly mediocre Florida State. Brigham Young isn't particularly good, and have already lost to Florida State. Maybe it's time for the fast-paced Louisiana Tech to shine?

Expect Tennessee to come out of this bracket. If not them, Southern Miss.

Kentucky did beat Florida without Nerlens Noel. Perhaps this team biding time before the NBA Draft can string together some wins and bring the Big Blue Nation faithful up to New York. Providence is likely their toughest challenge; Baylor has the talent but less in the way of execution. Could Detroit emerge after knocking off Arizona State? That's a real possibility.

Expect Providence to come out of this bracket. If not them, Kentucky.

I am deeply, deeply hoping for Virginia vs Denver. We'll bring out all the turtle metaphors and mock-cheer when there is a semblance of a fast break - or when an offensive player shoots with 20 seconds or more on the shot clock.

Tennessee/ Southern Mississippi vs Providence will be sloppy basketball, but a springboard for next year for both teams.

I'd predict a Virginia/ Providence final, with Virginia cutting down the nets at the Garden. The Cavaliers are a good team with some very bad days with a number of freshmen playing key roles.

For St. John's, the examples to hope for involve the Minnesota Golden Gophers team that came up as a 6-seed and made it to the Finals in New York; UMass, mentioned before; and the fact that last year's Saint Joseph's team had a 2-seed and was knocked off by Northern Iowa in a close game.

The Johnnies need to end the year with a better taste in their mouths, a springboard to next season.

The Red Storm last won the NIT in April of 2003 behind Marcus Hatten (with help from Elijah Ingram, Grady Reynolds, Anthony Glover and Abe Keita) in Mike Jarvis' last full year as head coach of the Red Storm.

Hopefully the Johnnies can get to the NIT Finals and not have a season anything like the disaster that was 2003-2004. (If you don't remember, I can add detail in the comments.)

The entire NIT field, sorted by Ken Pomeroy's ranking system - so you can see which teams should be favored to win it all. 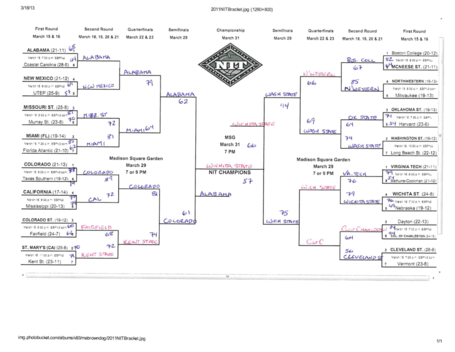 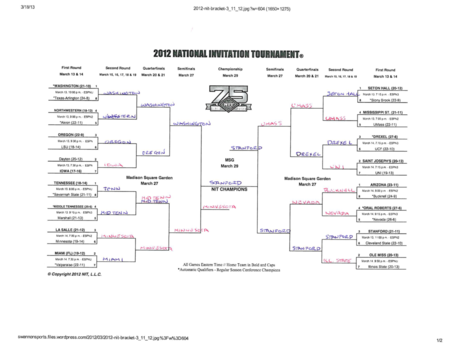