And read about how Mike Rice may have gone too far fifteen years ago.

Yesterday was Rysheed Jordan day around these parts. Catch up on the high schoolers' commitment, what his AAU coach says about him, and analysis of his game in the context of St. John's in our Story Stream.

Years ago, Steve Alford and Iowa were embroiled in a scandal surrounded sexual abuse by star wing Pierre Pierce. It was an ugly, ugly incident that involved a domestic dispute, a return the next night, and after the cops came the second time, assaulted his ex-girlfriend, tried to restrain her, and after she got away, trashed her apartment and stole her laptop. (More from the old blog).

Basically, it's like the Nate Miles situation at UConn but more violent.

New UCLA coach Steve Alford was asked about his vehement defense of Pierce during his introductory press conference, tone-deaf to the gotcha-ness of the question and the wrongness of his defense.

Alford released a statement to apologize for his actions:

At that time, I instinctively and mistakenly came to his defense before knowing all the facts. I wanted to believe he was innocent, and in response to a media question, I publicly proclaimed his innocence before the legal system had run its course. This was inappropriate, insensitive and hurtful, especially to the young female victim involved, and I apologize for that. I have learned and grown from that experience and now understand that such proclamations can contribute to an atmosphere in which similar crimes go unreported and victims are not taken seriously. It's important for me personally and professionally to make sure Chancellor Block, Athletic Director Dan Guerrero, all of my student-athletes and the entire UCLA community, including our fans, understand that today I would handle the situation much differently, with the appropriate regard and respect for the investigative process and those impacted by it.

A good start. Iowa fans that I know personally, to a man/ woman, say he's still a Mike Jarvis-level villain for the program.

Around the Big East

Butler's new assistant is an old assistant, returned. Former guard Brandon Miller led Butler to the Sweet Sixteen in 2003 as a player, and also coached at Ohio State and Illinois. He replaces Matthew Graves, who became head coach of South Alabama.

While Marquette guard Vander Blue might be looking into pro opportunities, center Chris Otule is filing paperwork to come back for a sixth year. He loves college that much. And loves playing defense in the middle for Buzz WIlliams. Also, Jamal Ferguson is transferring (I don't know who he is either); a busy day for the Golden Eagles.

Need a burner phone for a drug deal, scam, or to pull the ole "I'm moving to Prague" dating trick? There's an app for that! + Shamed sexter Anthony Weiner is considering a mayoral bid, but does he have enough substance? + Brazilian police removed indigenous people who were squatting on lands needed for the 2014 World Cup (in pictures) + slow-motion New York (a video)

Seton Hall is playing in next year's Coaches vs. Cancer tournament. The games will be at the Barclays Center on November 22-23, and the other teams will include Virginia Tech, Oklahoma, and Michigan State. Tough competition.

Sean Kilpatrick (who is a bit advanced for his age) is returning to Cincinnati for his senior year. The junior from White Plains - who once accepted and then spurned St. John's as a senior - had a subpar season but hopes to lead the Bearcats to the NCAAs once again.

Read about the time Mike Rice got knocked the f*** out by not one, but TWO assistant coaches on the Niagara staff for his maniacal approach to telling others what's right and what's wrong.

Iowa State reports "major violations", mostly done by the previous staff. By major, they mean "a bunch of phone calls", mostly dropped. The 79 violating calls (and almost 1400 unlogged dropped calls, ignored calls, et cetera) are not as juicy like bags of cash, houses, strippers, or even changed grades. In Iowa, even the basketball violations are boring.

California-Berkeley a/k/a Cal has released a new Nike-designed look. The colors were already fresh, and I love the addition of an angry bear silhouette.

Iman Shumpert's hair was just too corporate for the NBA.

Florida International reminds you that they're by the beach, just like Florida Gulf Coast. There are cabanas, too. 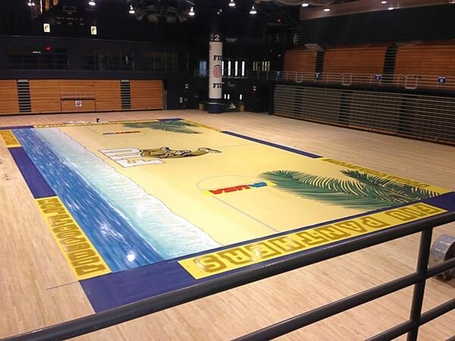