If there really are dog days of summer, these last two weeks have earned the title. It's hot, it's sticky. The last thing you want to think about is college basketball, right?

As we move closer to the home stretch of the summer, we inch that much closer to classes, fall workouts, Tip-Off, and of course real basketball. The new and improved (at least we think) Big East Conference is raring to burst onto the scene using its fresh platform, Fox Sports 1. It's an exciting time for the conference - old and new.

The Rumble thought it was a good idea, before all the craziness picks up, to check in with the other nine members of the Big East. They are foes between the months of November and April, but allies for now.

This year, the Big East will be in desperate need of finding a similar quality to its first 34 years. The ten programs that make up this inaugural basketball-centric union must be in this together, whether its coaches, players, or fans want to admit it.

To prove that it's possible, writers from all over the league have agreed to take part in our Big East Summer Q&A series. Over the next week we'll find out more about what the league competition has been up to since the spring, how its fans are feeling about the 2013-14 campaign, and perhaps a little reason why St. John's fans should travel to an opposing campus for a conference road game.

We have decided to post in the order of a loosely projected Big East power ranking, from bottom to top. First up, Chris McManus (@CerasolisGhost) of South Orange Juice fills us in on what's happening with the Seton Hall Pirates.

Rumble In The Garden: Explain where the team you cover fits in the natuonal hierarchy - imagine you're talking to a hoops newbie who knows Duke, Kentucky, and North Carolina exist, but the person doesn't watch the tournament or really know conferences' reputation. Who is Seton Hall? Think: "What is our team known for?" or "Why might someone have heard of the team?"

Chris McManus: Seton Hall is unequivocally known for their run to the 1989 NCAA title game and subsequent shafting by referee John Clougherty on a phantom call that helped propel Michigan to the title. Over two decades later, the Seton Hall program has shifted from a stature of national prominence to regional presence. Area TV coverage from SNY and unmatched brilliance on the radio waves (since relegated from WABC to oldies channel 1250 WMTR) by Gary Cohen and Dave Popkin is the extent of consistent coverage for the Pirates. Nationally televised games have been few and far between, which looks to evolve with the new Fox Sports partnership.

Postseason appearances haven't always been rare for Seton Hall. In fact, at one time, they were quite common.-Chris, South Orange Juice

With just two NCAA appearances since 2004 and none since the debacle that was Wichita State in 2006, the reach of Seton Hall basketball has retreated from the nosebleeds of Continental Airlines Arena to the fairly priced lower bowl (the upper tier is curtained off) corner seats at Prudential Center. A shrinking of a once noticeable fan base that wants to once again expand to the 200 sections of the Rock and beyond.

To a college basketball newcomer, Seton Hall is probably known for former shooting guard Jeremy Hazell’s constraintless shooting range or perhaps a litany of off-court incidents which range from Hazell being shot, to former forward Herb Pope nearly dying after an off-season workout.

RITG: Add a fun fact about the school or the program - something that would impress a person who is loosely familiar with the school.

CM: Postseason appearances haven't always been rare for Seton Hall. In fact, at one time, they were quite common. For nearly a decade (including NIT berths), they found themselves playing meaningful basketball in March.

Most impressive was a stretch of six NCAA appearances over seven seasons (1987-94), including the aforementioned controversial Championship loss to Michigan in 1989.

RITG: How do you feel about the new Big East - being in the conference, worries about the future? What are you most excited about/ to see? What worries you?

CM: The reformed Big East Conference underwent a downsizing that significantly increased stability, while bottlenecking maximum potential. Teams toward the bottom of the Big East which bring less to the table (DePaul, Seton Hall, etc.) have to be thrilled with solidifying their future in a football-controlled (AKA: money-controlled) collegiate ecosystem. Programs like Georgetown and Marquette may be slightly disappointed that they have been left out of the seemingly more lucrative conferences like the Big Ten and ACC.

There are only two major causes for concern that are immediately visible in the structure of the Big East:

1) The new TV deal with Fox Sports turns out to be less of a game-changer than previously thought. For schools like Xavier, Butler, and Creighton, the deal looks to bring more regional & national coverage no matter what. For teams migrating from the former Big East conference, the precise details of Fox Sports’ coverage are yet to be known (this is a worthwhile read) and could turn out to be less of a blockbuster deal than expected.

2) With the elimination of perennial Dancers in Notre Dame, Pittsburgh, Syracuse, Louisville, UConn and Cincinnati, will the Big East suffer from a dilution of talent? In the first season at least, that doesn’t look to be the case. The league contains mostly teams that are on the rise as well as several NCAA tournament hopefuls. However, the conference lacks heavyweight power at the top, which looks to throw a wrench in TV ratings and could create a downward trend going forward.

RITG: Which other Big East team are you most excited to see in action next year?

CM: It has to be Creighton. With Doug McDermott and Grant Gibbs both back for a final season, it will be interesting to see how they fair against better competition. I’m also intrigued to see how some of these Big East teams perform at a hostile Missouri Valley venue. If you’re confused by my last statement, the MVC has sported some serious overlooked home court advantages in recent history.

RITG: What does next season look like? Who leaves the program? Who is new? Who returns? Who is expected to be the on-court leader(s)? 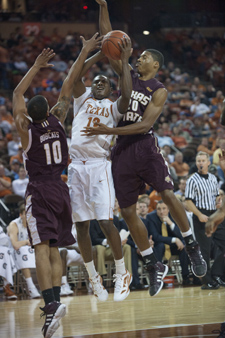 Kevin Willard has brought wing Stephane Manga and guard Hakeem Harris in via junior colleges. As far as Class of 2013 recruits go, former Northwestern signee Jaren Sina fell into Seton Hall’s lap after the firing of Bill Carmody and forward Rashed Anthony was just inked after approval from the NCAA clearinghouse.

However, the biggest addition comes in the form of Texas transfer Sterling Gibbs (driving through traffic at left, photo by Dante Bachus, USA Today Sports), who will see the majority of minutes at point guard this season. The Pirates’ season may hinge on his ability to run the show.

After an injury-plagued 2012-13 campaign, healthy additions of Patrik Auda and Brandon Mobley in the front court will almost act as transfer additions to the team. Seniors Aaron Geramipoor, Eugene Teague, Fuquan Edwin, and Brian Oliver will need to step up and provide leadership that was transparent at times last campaign.

RITG: In 100 words or less, explain your last season (or last three).

CM: Kevin Willard’s first three seasons at Seton Hall have been full of "almosts." 2010-11 was crippled by Jeremy Hazell’s broken wrist during the non-conference schedule. Seton Hall missed making the 2011-12 NCAA tournament after falling to Rutgers in OT and suffering a spineless defeat in Chicago to DePaul. As previously hinted at, 2012-13 was hampered by a long list of injuries, mainly Patrik Auda, Brandon Mobley, and Brian Oliver, though others played through injuries, like center Gene Teague.

RITG: What's the big concern about next season?

Seton Hall will arguably start the season with less depth at point guard than they did last season, when freshman Tom Maayan and shooting guard Aaron Cosby, since departed to Illinois, split the time following Jordan Theodore’s graduation. One can project that Sterling Gibbs will be a better point guard than Maayan (who may still return) or Cosby, but that is a huge question mark. Further, who would back him up if he gets injured, has to take a breather, or is in foul trouble? Perhaps freshman shooting guard Jaren Sina or junior college guard Hakeem Harris will step in. Again, all three guards are major question marks.

RITG: Bonus question: Give a reason to visit the area around the school's campus/ arena.

CM: If you’ve never been to Prudential Center for a major sporting event, you should go. The arena is more compact and of course more modern than Seton Hall’s last venue, Continental Airlines Arena -- now the Izod Center -- in East Rutherford.

While less attractive games against low-major opponents (we’ve seen a lot of these) can be fairly dull, there have been quite a few raucous atmospheres at the Rock against top programs like Syracuse and West Virginia, as well as local grudge matches against St. John’s and Rutgers. Last season’s tilt with the Scarlet Knights saw the upper sections of the Rock open for the first time while Seton Hall is on the court.

Thank you to Chris for participating. We look forward to the local "grudge" matches in New York and New Jersey this year. Stay tuned for the other eight Big East bloggers' answers throughout the week.