The defense has been energetic at times, but the results are a far cry from last year's hard-to-score-on squad.

If you haven't taken the time to read John Templon's analysis of St. John's lineups/ rotations on Big Apple Buckets, go on over and give it a read - it is certainly worth your time. He analyzed the play-by-play data to isolate the on-court efficiency of various lineups and of individual players.

Before we discuss John's findings, a diversion. At the heart of the data is the fact that St. John's has struggled.

The gray line is last year's average defensive performance from the beginning of Big East play through the end of the NIT; the bars are this year's game-by-game performances, with the subpar performances in red.

Removing the Dartmouth game, the offense is about the same - .98 points/ possession - and the defense falls a bit, giving up 1.09 points per possession.

At a pace of about 68 possessions per game, St. John's is giving up 7 points more per game on average in Big East play, and scoring 4 points per game more.

A lack of cohesion in the lineups has been a big talking point, as Steve Lavin looks for a combination that can win - but changes combinations despite liking the ability to create of Rysheed Jordan, or the defensive pluck of God`sGift Achiuwa, or the spacing Max Hooper brings to the table.

For a team that was able to hang its hat on the coat rack of athletic defense, the drop in defensive efficiency is a disappointment - leading to a lack of identity.

The defensive struggles are evident; opponents have always enjoyed attempts at the rim, but this year, teams are taking advantage of St. John's eagerness to block shots (often with multiple players trying to block the same shot) by waiting on the weak side of the shot or nearby to grab the offensive rebound and get a second attempt at the rim.

In Big East play, St. John's is giving up a league-worst offensive rebounding percentage of 38.8% - opponents grab just under 39% of their own misses. With that many chances at high-efficiency shots at the rim, teams can't help but put up a few extra points - enough to beat the Red Storm's best efforts.

Obviously, there is more than just the defensive rebounding at issue; the Johnnies struggle to score efficiently inside the arc (league-worst 40%), continuing to take the long jump shots opponents give them without success.

Analyzing plus/ minus efficiency numbers 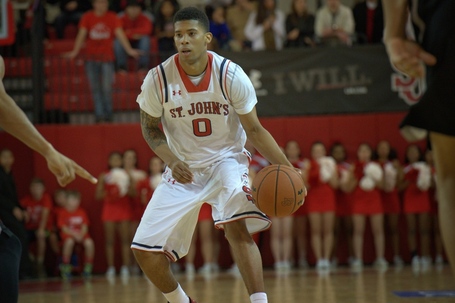 Using Big Apple Buckets' individual breakdowns of on-court and off-court efficiency for a closer look, we stress that grains of salt apply - it's only half a season and the Johnnies have taken a whole bunch of losses. Losses affect rotations and efficiency with players on court in certain situations to foul and extend the game, for example.

But the information is illuminating, highlighting Steve Lavin's constantly-changing rotations and inability to settle on a lineup he can ride with (foul trouble by players like Orlando Sanchez and D`Angelo Harrison have also changed rotations in first halves).

And there are some other intriguing answers for some of our readers who advocate for players like Jamal Branch (who enhances the offense but is part of some of the worst defensive performances) and Chris Obekpa (who does improve the defense, but hurts the offense). And the numbers for JaKarr Sampson and Rysheed Jordan are not encouraging; both have struggled on both ends.

The season continues with a home game against Seton Hall. Did the Dartmouth game help clear up some questions for Steve Lavin and the staff? Did Phil Greene IV's ability to shine as a catch-and-shoot guard open some eyes?

The Red Storm have found themselves in a position where winning the Big East Tournament is the only likely way the team will make the NCAA Tournament. Lavin wanted his team to peak in February; that's just over a week away. Can they peak enough to overcome some bad losses and sneak into the Tournament?

We'll be here to find out.