A celebration of typing, conversation, and Rumble membership.

Share All sharing options for: The Rumble's most active commenters and FanPosters of 2013

Who posted the most on the Rumble?

Yes, we're keeping stats (or at least, the mothership is).

For comments, Quinn and myself commented the most (responses and game threads, we must have been wordy!) but we were joined in the top-10 by Rumble members Joamiq, JasonCole, rekson, Bignickle, Northeast Corridor, Moffman93, kl0812, and redmen9194. Your efforts embiggen us all.

The graphic (click to SuperSize if it's straining your eyes): 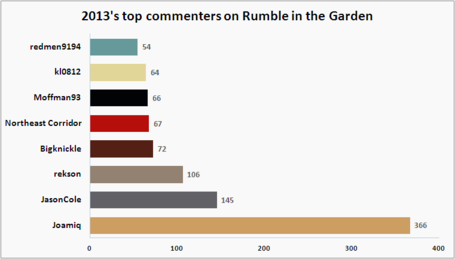 We have noticed that some new commenters have jumped into the fray, so this set of names probably won't look the same next year.

I think next year, we're going to have to dole out some poster awards! We thank everyone for the conversation here - it's been smart and civil, and we hope to keep up the standards (and ask more questions/ have more fun as the season continues). Give yourselves a hand.

In terms of FanPosts, we're a quiet bunch here, with Redmen9194 giving us the scene from the home games. We love his impressions from Section 110, keep it up! Joseph Nardone and Ray Floriani have contributed a trio of FanPosts each - more articles than anything - which are also appreciated.

(Others - feel free to post on multi-paragraph thoughts about the team to start conversations. The best ones will be added to the front page, but those not added are also an interesting read.)

Most active day: June 20 - what we thought were a first look at the new St. John's uniforms from UnderArmour (they were not finished nor released to the wild at that time. The new unis were much more awesome than that mockup.

Most read posts out of our 426 articles:

Let's get our 2014 commenting off to a strong start with the Georgetown game!