In review: Max Hooper, the zone-buster on the bench

Hooper couldn't find the minutes to make an impact on the Red Storm in his only season with St. John's.

Share All sharing options for: In review: Max Hooper, the zone-buster on the bench

The hype of Max Hooper came early and often. He was a sniper with great YouTube clips, spoken of highly as a talent who could get very hot in a hurry.

And given his game - not-particularly athletic, and skilled at one thing that only required space and a good pass - Hooper seemed like an excellent complement to the rest of the team of athletic slashers.

After a middling season from Marc-Antoine Bourgault last year (29% from beyond the three-point arc), the excitement and hype about Max Hooper has been at "new season of Arrested Development" levels (or "new Kanye West/ Jay-Z album" levels perhaps?) in the St. John's twittosphere. While not every game was quite so spectacular, Hooper exploded for 31 points against a younger version of Italy's Stella Azzura squad, nailing 10/13 from beyond the arc. That kind of shooting in any game competition is a strong, skilled performance.

Hooper's big game explosion and the fact that he seems to have enjoyed heavy minutes indicate that he's a big part of the staff's plans.

And at times, he was a big part of the plans.

At other times, he enjoyed the company of Darrick Martin and Jim Whitesell on the sidelines.

So despite shooting over 40% from the field and being a zone buster on a team that needed scoring... Max Hooper struggled to see time on the floor. 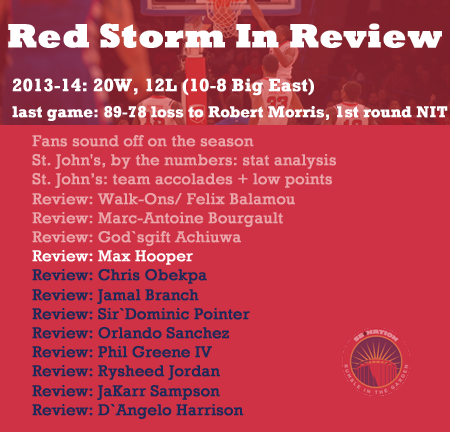 Now transferred to Oakland University outside of Detroit, Hooper never quite fulfilled the promise he seemed to have, but he did have three double-digit games, where he showed how effective he could be when given space - and when his teammates found him.

So why didn't we see more of Hooper, when the team struggled to put up points?

There were games where he played and wasn't connecting - 1/5 against Villanova at home in 18 minutes, 1/5 against lowly Monmouth.

And then there was the issue that Hooper took away from the defensive pressure the Johnnies wanted to apply. So despite a strong performance in the Penn State game (15 points in 26 minutes), one of the errors the Johnnies made was his awkward flagrant foul in overtime, leading to a 89-82 loss.

Still, one can't help but think that an offense more designed to get him opportunities could have found him consistent minutes. Nine of Hooper's 25 games (of a possible 33) had him play 10 or more minutes. Sixteen of his games saw him receive fewer than ten.

As discussed with God`sGift Achiuwa, consistency was lacking in the rotations as Steve Lavin looked for a combination that would work, and tried to exploit matchups.

What does the absence of Hooper mean?

Much like with Achiuwa, Max Hooper ended up being a safety blanket - a hard working player Lavin could use for some quick points. In the team's last game against Robert Morris, Hooper exploded for 18 points and added three assists. Perhaps it was the level of competition, but Hooper showed that he could make plays and bring a team back with his skill.

Now, St. John's will look to Phil Greene IV to be the team's sniper, for D`Angelo Harrison to continue looking for his outside shot, for Amar Alibegovic to perhaps fill the long-range shooter role... and try to find other players to open up the floor as well.