Obekpa is back, focused and listening. Can he become an offensive force as well as a defensive gamechanger?

The gauntlet has been thrown by head coach Steve Lavin.

Chris Obekpa, the returning 6'9" center who-almost-didn't-return, has been tagged by the St. John's coach as a player who should average a double-double this season.

Considering Obekpa scored under four points per game and averaged five rebounds, that's a huge leap; especially considering that Obekpa is making the leap as a junior, not as a sophomore who is finally acclimated to college basketball. (And for other reasons, there is reason to have some doubts that he can average a double-double).

BUT. Even if Chris Obekpa doesn't quite make it to a double-double, we think Obekpa will make more of an impact. A

nd we think he made a bit of a jump last season as well, despite playing in a quartet of forwards and seeing more time on the sidelines than he did the previous season. 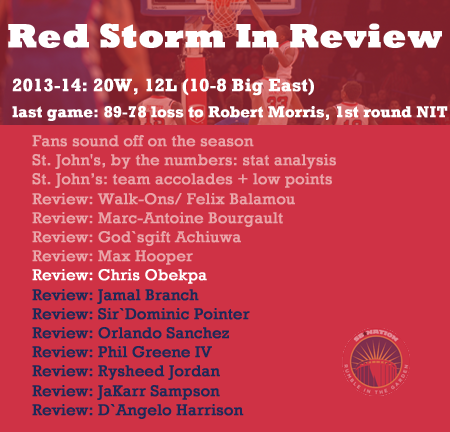 Yes, Obekpa's points per game average went down last season. But so did his minutes, as he sat on the bench in favor of the multi-facteed Orlando Sanchez and lengthy Jakarr Sampson.

Despite Obekpa bringing unparalleled shot-blocking, Sanchez brought fairly good shot-blocking with an offensive game and the ability to handle the ball.

And so, fans didn't notice that Obekpa's per-minute efficiency improved last season overall. Or that his game really took off when he was playing well down the stretch - which coincided with St. John's hot streak.

In Big East play, he shot 61% from the field, upped his usage rate (percentage of shots he takes while on the floor) to 12.5%, while blocking shots. And his on-ball defense, at times, was very good.

However, in some ways, Obekpa took a step back. His rebounding percentages dipped from the previous year, where he grabbed 19.5% of defensive rebounds to a 2014 level of 16.4%.

And before he decided to transfer, Obekpa had issues with foul trouble - and internal frustrations with losing.

According to the Daily News, after asking for his release to transfer, Obekpa reflected on his own role in his struggles.

"It was a decision out of emotion and the way it ended. It was two years, back-to-back, it wasn’t working," he said. "Then I thought more about it. It might be my fault? I hadn’t thought about that."

A team is best when players take responsibility and don't blame their teammates when they could do more.

And now that he has chosen to return to the Johnnies, Obekpa can do more. He already makes the Red Storm into a top Big East defense. From our piece on Obekpa's return (linked above):

His efforts have launched St. John's from a poor defensive team to a squad that improved its 2-point defense from 250th in the nation to 40th - a leap that coincided with St. John's winning records in the past two years.

The defensive impact is unquestioned.

His leap may come from simply playing more than 50% St. John's minutes (improving the defense with every minute he plays), but some of his improvement will come from a better attitude and an attention to detail around the rim on both ends of the floor.

For St. John's to make up for the loss of Sanchez, Sampson and God`sGift Achiuwa, Obekpa cannot be content with just being a record-holding shot-blocker.

He has to be a complete big man and live up to his talent.

His increase in scoring efficiency now needs to be accompanied by more attempts. Obekpa is not going to create shots like Orlando Sanchez or take long pick-and-roll jumpers.

But he can be more involved in the offense off of the pick-and-roll. His teammates say that he is one of the team's best at setting hard screens; working to get open after the screen while going to the basket will get him shots.

And a more confident Rysheed Jordan, coupled with a lot more time, should mean that his teammates will find him for dunks at the rim if he positions himself well.

With the addition of Keith Thomas, rebounds could be hard to come by, if he lives up to his hype. But Obekpa can make a better effort to box out and chase rebounds - when he's not out of position from blocking a shot.

It's a delicate balance; When a player has to reach for the blocked shot, but loses out on the potential rebound on the defensive end.

Still, with opponents looking to attack away from Obekpa, the Nigerian big man should look to concentrate on chasing the ball and using his quickness to beat others to the spot.

Whether he gets to score more or not, shooting 40% from the free throw line hurts the team, and makes Obekpa a player coaches will considering subbing out late in games.

Chris Obekpa is talented. He can be a better offensive player. But for him to become a double-double player at his current rate of scoring efficiency (and we're using the Big East rate of 61% shooting), he would have to generate around seven shots from the field per game and hit his free throws.

That's not as easy as it looks. Obekpa took 3.5 shots per game last season, mostly at the rim. He can get some dunk opportunities via his teammates' penetration, and maybe some putbacks. But he will have to create a few offensive chances on his own to be a greater offensive force for St. John's.

Can Obekpa's teammates look to pass to him - helping him get dunks - instead of looking for the quick shot?

Additionally, Chris Obekpa's free throw shooting improved to 40%, but that's far below where it needs to be.

And the rebounding has to improve - positioning, aggressiveness and technique.

Obekpa should be a better player, now that he is the focal point in the paint. How well the team looks to find him - and how well he improves his offensive comfort - will determine whether he can be the double-double machine Stave Lavin wants him to aspire to be.