In review: Jamal Branch looking for better decision-making as a senior

It's Branch's last go-around in college ball, and he's hoping to finally put a promising package together.

Share All sharing options for: In review: Jamal Branch looking for better decision-making as a senior

Despite being a top-60 guard coming into college, Jamal Branch has struggled to find a consistent role both at Texas A&M and at St. John's.

Branch has had stretches where he gets run. In 2013, he played over half the Red Storm's minutes through January until Nate Lubick rolled up on his leg.

Then he struggled with effectiveness on his return.

Last season, his minutes - like most players' minutes on the roster - came and went, but he had a nice streak of playing more than half the team's minutes in the second half of January, and was a factor again after oral surgery in February.

Said to be the team's most improved player coming into the season, Branch was a more efficient scorer on the court but struggled to find the consistency he needed.

Can Branch find a consistent role in his senior year? 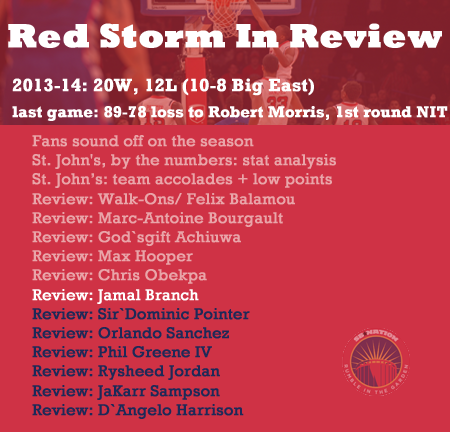 Jamal Branch is a long guard, originally known for his defensive acumen. With St. John's, he has been able to pick up steals; but much like the rest of the roster, plays defense to funnel opponents into the paint vs. individually shutting them down.

It's hard to say just how good Branch can be; his minutes have been spotty. Perhaps it's both because of his aggressiveness... and his lack of aggressiveness.

For a Red Storm team that favors aggressive, attacking scorers, Jordan may supplant Branch's role - and more - especially if Branch can't regain his scoring touch. His turnovers need to improve as well; the Red Storm value the ball, and a player who isn't scoring and isn't valuing the ball will find himself observing much of the action from the bench.

First, the aggressiveness. Jamal Branch makes some deft drives into the lane, and with those drives come some brilliant passes to unsuspecting teammates.

Sometimes, those teammates aren't prepared. Sometimes, Branch's passes are wildly speculative halfcourt passes that might be a better fit on a college football field.

His turnover rate of 25% last year stands out, mistakes Steve Lavin seems to want to avoid. Most of the regulars have incredibly low turnover-rates, getting straight into their offensive moves when they choose to make an action with the ball.

This isn't to say Branch was a bad player - but on a stacked roster, Branch lost out in the minutes crunch in the backcourt.

Branch continued to be a less-eager scorer on the floor, despite a very good field goal percentage at the rim (71% - second best on the team to Orlando Sanchez).

Like the rest of the roster last year, though, he tended more towards the two-point jumper (50% of his shots), and was not always aggressive with trying to make shots. Below, red = more than 20% of the team's shots taken while on the floor.

Branch was, at the very least, not as aggressive compared to Rysheed Jordan, who rarely played a game where he didn't aggressively look for his shot, falling below 20% of the team's shots in few games with fewer up-and-down spikes.

And it seemed that last year - or in general - Steve Lavin prefers a point guard who can create points on his own over a point guard who is looking to run sets. Many of St. John's offensive sets were either early shot-clock quick hitters or late shot-clock isolations or pick and rolls.

Branch brought a different look, the ball handler, the calming influence, the pass-first point - and perhaps he can blossom into that role again this year on a team that will need point guards to create more offense for others.

"I need to improve on my decision-making, my shooting, being more vocal, being that leader," Jamal Branch told the Rumble at Big East Media Day, and Branch knows exactly how he needs to change this season.

Against Robert Morris, Branch was one of the team's bright lights, shooting 4/7 from behind the arc and inside the arc. Rysheed Jordan sat out with tonsilitis, and given a start, Branch once again teased what he can be capable of.

Can he turn that package into a player who scores enough to draw attention, and takes smart shots (read: drives to the rim, where he can be extremely effective, and three-pointers)? That will open up spaces for the passing.

Not every pass needs to be an adventure.

But like Rysheed Jordan, when given a lane, Branch can cut deep into the paint, draw defensive attention, and hand the ball off to a big man.

This year's big men should drift away from the basket much less frequently than last year's forwards.

And having big men near the basket should look like opportunity for Branch - finishers, hungry for the ball.

We're not going to try and quantify leadership. But the often-quiet Branch needs to be a heady guard for the Red Storm - ready to fill in any needed roles, selfless on a team that may be finding better shots.

Because Jamal Branch will be a large part of this season's success, one of a quartet of guards who will see extensive playing time.