In review/ preview: can Sir`Dominic Pointer fill a forward role and lead with his defense?

Pointer has been an important part of the Red Storm. Is he the x-factor to push them into the NCAA Tournament?

Share All sharing options for: In review/ preview: can Sir`Dominic Pointer fill a forward role and lead with his defense?

Sir`Dominic Pointer started once last season, but with the exception of a five minute stint against Marquette in Milwaukee, his time remained consistent.

As has Dom Pointer's game. But this year, Pointer needs to step up and fill the departures of three forwards - and now, a rebounding monster who was declared ineligible.

Pointer continues to be a defensive pest and an offensive jack of many trades. In his final season, can he be the glue that holds together St. John's younger set and veteran guards? 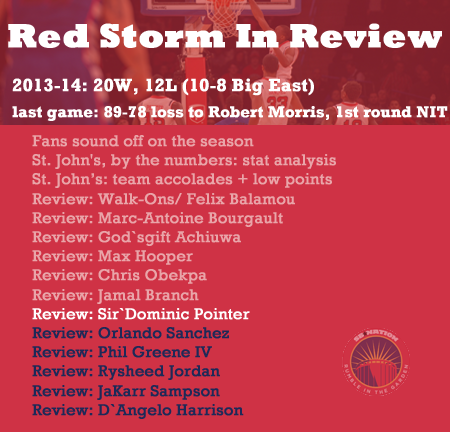 Here's are some truths about Sir`Dominic Pointer - he plays hard, he hustles and he is a far better scorer in transition - with his energy and hops, he's made for fast-break, highlight-reel finishes.

And it's due to his ability to convert at the rim - or more accurately, the quality of chances he gets at the rim.

Looking at his shot efficiency from different levels of the floor:

He's notably worse away from the rim, obviously.

But the kicker? In transition, Pointer hits a scorching 70% of his shots at the rim - less than only God`sGift Achiuwa, Orlando Sanchez, and Jakarr Sampson.

But in the halfcourt, Sir`Dominic Pointer shoots 46% at the rim - second worst among regulars (D`Angelo Harrison brought up the rear in that category).

Which is to say that even when he gets to the rim in the half court, he's not particularly good at finishing. Pointer's offensive craftiness and shot-making leaves a bit to be desired; but he can still have a huge impact as a player who rebounds, attacks the glass, forces steals and gets the Red Storm to play transition basketball as the catalyst for the defense.

Sir`Dominic Pointer's defense has remained consistently solid in the quantifiable ways - and he even blocked a higher percentage of shots last year than in previous seasons.

Sir`Dominic Pointer will likely be thrust into a bigger role this season - possibly as a point forward, asked once again to defend power forwards as he did during his freshman year.

He's strong, but gives up size; can he maintain his composure on the defensive end and find ways of punishing opponents on offense? His occasional urge to argue with the referees when he doesn't receive a foul call does hurt the Red Storm's transition defense.

Emotionally, Pointer has to lead the team in playing each play with the same tenacity, not losing focus because of a wrong on one end or frustration with an opponent's run.

There's an elite defender in Pointer. He has the size, quickness and desire. But he has to have the focus as well.

Likely to play a lot of minutes as an undersized power forward with the departure of Keith Thomas, Pointer will be a pest - but can he help St. John's end opponent's offensive trips? Or will opposing teams feast on second chances, and second-chance points?

Can his scoring improve? Fans have said Pointer displays a more confident shooting stroke in preseason practice. It would be helpful if St. John's could shoot well enough from the outside of the arc to force opponents to play man-to-man defense.

Against man defense, Pointer can take advantage of his quickness with straight-line drives to the rim, provided his handle allows him to get there. His dribbling in the open court is good enough, but Pointer could use the ballhandling skill of the other guards to get to the spots on the floor where he can do damage.

And against a zone? He's going to have to find ways of getting to the basket or finding solid jump shots.

But Sir`Dominic doesn't have to be offensively amazing. He just has to be solid, not a negative on offense, while creating chances for his teammates with his defensive skill.

And with his defense, hustle, passing, and a little bit of efficient scoring - he can be that glue this team needs to win the tough games and get into the NCAA Tourney.