In review: Jakarr Sampson's departure leaves a hole - in the defense

Share All sharing options for: In review: Jakarr Sampson's departure leaves a hole - in the defense

Jakarr Sampson left St. John's after last season surprising Steve Lavin (and maybe only him, given the whispers of Sampson's eyes being on the NBA) and leaving fans wondering what could have been.

St. John's would have been a top-25 team with Sampson!

St. John's could have made a deep NCAA Tournament run!

Sampson would have developed strength and an outside shot and would have been drafted!

Maybe those statements would have been true - personally, I have my doubts - but we live in a world where Jakarr Sampson starts games at guard for the Philadelphia 76ers, and St. John's looks for ways to mitigate the loss of Sampson.

And while many aspects of Jakarr Sampson's game and fit with the team may be overrated, one thing is true - Sampson's departure will profoundly change the Red Storm. 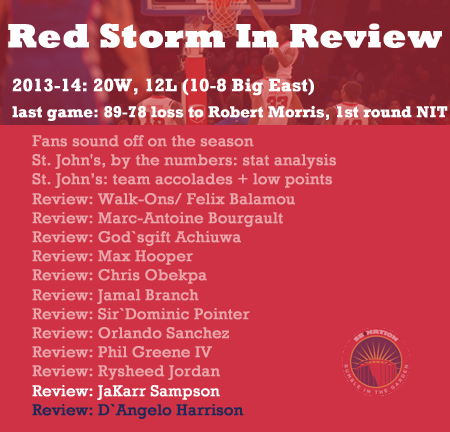 The game of Jakarr Sampson

players that mix height and athleticism - the LeBron James and Kevin Durants. But that requires a) ballhandling skill and b) strength. (And possibly better awareness of space and movement without the ball on the court).

Jakarr succumbed to his lesser angels and remained a player who picked and popped, inexplicably just inside the three-point line, shooting long two-point baskets, the least efficient shot in the game.

Much of that is on Sampson; that shot draws no fouls, isn't worth an extra point like three-pointers are, and there is a reason no other player takes 60% of his shots from that range. For a player who takes that many shots consistently during a game, taking two or fewer free throw attempts in 14 of 33 games seems... well, that's a free throw rate usually associated with an outside shooter.

The shots Sampson took were also duplicated by most of the regulars; leaving St. John's to be a team of extremists that rarely got shots at the rim in half court play but rarely shot three-pointers.

The defense of Jakarr Sampson

But what's done is done; those are the shots Sampson chose, and St. John's seemed fine with his output. For St. John's, the real issue will be the loss of Sampson's defense and length.

While not always an adept defender, Sampson's raw athleticism and willingness to swat shots may have meant as much to the Red Storm interior defense as Chris Obekpa and Orlando Sanchez. Sampson blocked 3.6% of the shots that came his way, adding another level of length to shoot over.

St. John's no longer has that length to funnel opponents in towards Obekpa, nor do they have a long, rangy player that can catch up in transition (or after a mistake) and block a shot from behind.

Length often corresponds with defensive strength, statistically; and despite Sampson's lack of post strength, he was an integral defender in the paint.

The Johnnies became a very good defensive team with Chris Obekpa and Jakarr Sampson; how will they be with just Obekpa?

The effect of Sampson's departure

Sampson's game didn't change drastically in his two years. He took fewer shots in 2014, making a higher percentage of his long two-pointers. But he showed little interest in trying his deep range, despite that being a hole in his game identified by scouts.

Still, Sampson's 13 points and six rebounds are not easily replaced - and less easy to replace is the unique length and athleticism that made him a transition threat and an important part of the defense.

Sir`Dominic Pointer is a game defender, but gives up three to four inches of height.

Keith Thomas could have brought an exciting new dimension to the forward position - better skill and effort on both the defensive and offensive glass - but he's gone from the program.

Amar Alibegovic might one day bring shooting, but so far, he has only brought elbows and scrappiness.

So will the Red Storm be able to defend as well without Jakarr Sampson? That's the big question. The Red Storm need their defense to be excellent, but the shape of that defense is up in the air. Can a four-guard look do the job? If Adonis Delarosa is eligible, can he play a factor? Will it be pressure defense?

So many questions - and the Red Storm's first NCAA berth in four years is riding on the answer.