In review: Orlando Sanchez - versatile, strong on the glass, but often too quiet

The big man was very good, but was not a high-usage player; maybe he should have been. He will be missed.

Share All sharing options for: In review: Orlando Sanchez - versatile, strong on the glass, but often too quiet

Yes, there was only one year of Orlando Sanchez, aka Primo.

It was a good year. He didn't turn out to be the second coming of Magic Johnson, but he did prove to be a sometimes-unconventional-looking asset to the Red Storm, often in intangible ways. And he filled a number of roles for the Red Storm - the big man who rebounded, the multi-faceted player (but with height).

Primo was sneaky-good. But on last year's Red Storm team, "sneaky" sometimes meant that he faded from view or sat with foul trouble, and his efficient impact was not as great as, maybe, it could have been. 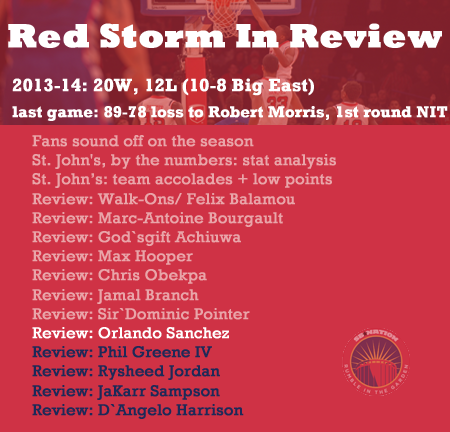 As versatile as advertised..

After finally being freed to play college basketball, Orlando Sanchez was... somewhat frustrating for a fanbase that expected the possible "best player on the roster" to be the leading scorer or leading rebounder.

Sanchez was fifth in scoring. He was second in rebounds.

Sanchez is a reason why we look at tempo-neutral and per-minute stats instead of raw numbers.

Orlando Sanchez was the team's most efficient regular - assuming you can't call Max Hooper's nine minutes a game "regular". As a power forward, Sanchez posted a two-point shooting percentage of 59.6%, best on the team.

His defensive rebounding rate of 20% led the team, and finally gave the Red Storm a big man who ended possessions - a trait sorely lacking in earlier combinations of St. John's bigs under Steve Lavin after the 2011 class.

And with some heady play, Sanchez was a solid defender and team player. He set screens, defended the post decently at times (at other times, picked up fouls or didn't set his position early enough). His ability to reach into driving lanes or alter shots helped create a zone of failure for opponents in the paint area.

And as team play goes, he was a bit like Sir`Dominic Pointer, with a stat in every column, though he was a far better rebounder and less of a passer.

...but the doctor needed a larger dose

Yet Sanchez scored in double figures only eight times in 32 games. He maxed out at ten shot attempts, a level he reached three times against soft opponents (Fordham, Columbia, Dartmouth). With such an efficient player gifted with such size, could he also have been more dominant, taking shots from less efficient Red Storm players?

What if he played on a team that played him in the high post, where he could thread some passes to generate easier looks?

What if he didn't get the notion that he should be a one-man, 230 pound fast break? Some of those plays ended well, and Lavin had to like that occasional burst of offensive aggressiveness from a player who took what his teammates gave him. Some of those plays, of course, looked like fast break streetball.

What if he chose to be a true post presence instead of a small forward, like Sir`Dominic Pointer was and like Jakarr Sampson styled himself to be?

It was a good year.

Hard not to think that Orlando Sanchez' skill set could have been put to better use, if only he was more aggressive, if he didn't fade on offense while other players took lower-percentage shots or forced the action.

What does the absence of Orlando Sanchez mean?

Orlando was the closest thing St. John's had to a rebounding big man, the kind of player who could both defend opponents and rebound the ball off the glass, allowing Chris Obekpa and others to leave their main responsibility and swat a shot.

St. John's now goes into the season without that size and height - especially now that Keith Thomas is gone.

This is a real problem. But if the newcomers can get up to speed, they, too can cause problems. Not in the way Orlando Sanchez could on defense, but in terms of being big bodies and height.

On offense, Sanchez' tendency to drift for the three-pointer or the long two helped stretch opponent defenses on occasion, but also helped clog up the Red Storm offense with inefficient shots that didn't draw fouls.

Will a newcomer be able to bang inside and generate free throw attempts at a higher rate? Possibly. (Though Amar Alibegovic's game, from what we know and have seen statistically, could be similar offensively to Sanchez, but without the passing.)

Will that newcomer also struggle with turnovers and not be as efficient scoring the ball? Likely.

St. John's may just end up being not better or worse without Orlando, but... different. For a team that was filled with potential that didn't achieve the goal of reaching the NCAA Tournament, maybe a journey into the Big Man Unknown is a good kind of different.