It's going to be the first Big East Tournament with newbies Xavier, Creighton and Butler. 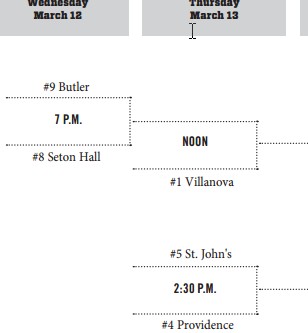 But it's also going to be a knockout Tournament. Five of the ten teams entering the Big east Tournament have realistic hopes of an at-large NCAA bid next Selection Sunday.

Two more (Marquette and Georgetown) have outside shots at an at-large bid with a run to the Big East Tournament Finals in New York City next Saturday night.

We've got a Big East Tournament poll open - no prizes this year, but bragging rights make us all feel awesome, am I right? (I'm right.)

So enter your picks either below or at this Google Docs link, and let your rightness be known to all the world! We will announce winners at the end of the Tournament!