The Red Storm’s storied history in the Big East doesn’t include much success in the conference tournament.

As we touched upon Saturday leading into the regular season finale against Marquette, St. John’s didn’t even qualifyto play at Madison Square Garden some years when 12 teams qualified in a 16-team conference.

St. John’s hasn’t won the tournament since 2000 when they beat UConn in the championship game a year after losing to the Huskies under the same circumstances.

The Red Storm’s inability to find success in the tournament since then mirrors the program’s struggles in the 2000s.

But head coach Steve Lavin believes this current group of players is bringing St. John’s back to the surface from some deep and murky waters.

"They are the ones who have breathed life back into St. John’s basketball," Lavin said after Saturday’s win. "That’s the reason they came to this school. It was with the purpose to restore or redeem some respect for St. John’s basketball. I think they are continuing to author this rebuilding plan."

If that rebuilding is to include the program’s fourth tournament championship, it would leave no doubt to the Johnnies’ position on Selection Sunday March 16. Two wins in the Big East Tournament would help, but recent history shows the Red Storm don’t fare well this time of the season. 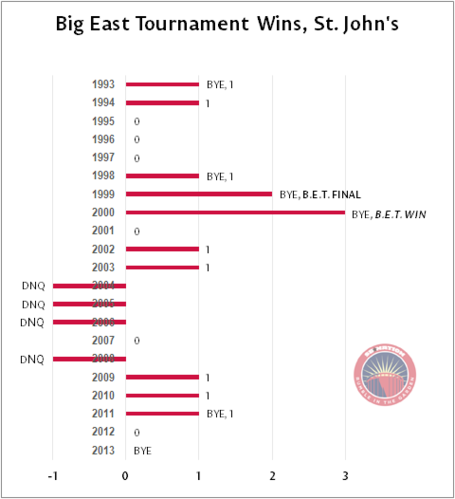 Winning conference tournaments- or even getting to the finals - is very very difficult, and has been difficult for the Red Storm in particular.

The graphic (at left; click to enlarge) shows St. John's wins in the Big East Tournament, indicating whether they earned a bye to a later round or not, and shows the number of wins the team has achieved; the team has won 2 or more games twice since 1993. The years the Red Storm did not qualify are indicated by the negative bars.

St. John’s, in fact, hasn’t won a conference tournament game since that run three seasons ago when they were the No. 5 seed coming into Madison Square Garden.

That year, the Red Storm went to the NCAA Tournament but fell to Gonzaga (without the injured D.J. Kennedy).

But the Red Storm have some memorable, and controversial, wins in the Big East Tournament to look back on.

And this team has enough talent to make past records fade into history.

Justin Brownlee’s mid-court celebration almost cost St. John’s in a big way. In the very least, Rutgers should have had one last possession to tie of win the game.

Brownlee tossed the ball into the crowd and appeared to be a few ticks left on the clock when he did so. He also probably traveled and stepped out of bounds. But the officials never made those calls as St. John’s won under a dark cloud of controversy. Even the Big East Conference admitted mistakes were made.

"Two separate officiating errors occurred at the conclusion of the St. John's vs. Rutgers game," their official statement lamented. "Both missed violations should have caused the game clock to stop and a change of possession to occur prior to the end of the game. Neither error is reviewable or correctable under NCAA playing rules."

The game should not have arrived at that point, but St. John’s couldn’t put away Rutgers when it had the chance. The Red Storm led by as many as 10 points in the second half, but Rutgers eventually took a 61-60 lead with 57.9 seconds left in regulation.

Hardy finished with 17 points on 5-for-17 shooting.

A lackluster UConn squad needed a big run in this Big East Tournament to bolster their NCAA Tournament chances. St. John’s, however, needed a big run and wanted to save coach Norm Roberts' job, and so they easily handled the Huskies in this first round game. The NY Post back cover of "E-Norm-Ous" indicated the importance; the Johnnies would lose in the next round, lose a squeaker at Memphis in the NIT, and Norm Roberts would be soon relieved of coaching duties.

Evans paced St. John’s with 19 points and 10 rebounds. Paris Horne and Brownlee each scored 13 points. The Red Storm shot 50% against a UConn team that led the conference in defensive field goal percentage at 38.9%. U Conn

The Red Storm beat rival Georgetown for the second time in eight days as they secured their first win in the tournament since 2003.

St. John’s had some momentum going into this tournament with a three-game winning streak that started with a 72-71 win over Duke just 10 days earlier.

Marcus Hatten scored 18 points to lead the Red Storm over No. 17 Notre Dame, which entered the tournament having lost three of four games.

The Red Storm led by 21 points at halftime and almost lost a 23-point advantage at one point. Elijah Ingram scored 17 points (5-of-8 from 3) for St. John’s while Kyle Cuff had 13 points and Willie Shaw scored 12.

This was an important win for St. John’s as they secured their 20th win of the season, which helped them secure an NCAA Tournament bid four days later on Selection Sunday.

One of the Red Storm’s better regular-season efforts ended with a Big East Tournament championship over UConn.

St. John’s won eight of nine games heading into the postseason, including an 83-82 win over Duke at Cameron Indoor Stadium. The Red Storm then beat Villanova and Miami to advance to the championship game against UConn.

Bootsy Thornton was named the tournament MVP as hit converted 21-of-41 shots in three wins. Thornton, Erick Barkley, and Lavor Postell made the Tournament team.