Who are the Colonials? And how much should St. John's fans worry?

The Robert Morris Colonials travel from Pittsburgh to face off against the St. John's Red Storm tonight at 7:00 PM in Queens. It's in Queens, it's on ESPNU, it's the start of a run to Madison Square Garden - if St. John's comes together and plays well. 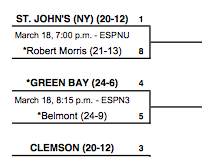 I know about as much about Andy Toole's team as you do. In fact, you might know more.

So I reached out to some RMU folks for some answers about the Colonials. Joining us is:

They clue us in to personnel issues, the danger of the smooth and creamy Karvel Anderson (remember the Kendrick Perry problem during Youngstown State, fans?) and how the RMU zone might bring back bad memories.

1// This whole NIT-not-NCAA thing has to be grating for Robert Morris and the fans. What's the disappointment and dissatisfaction level at RMU?

CHRIS: Head coach Andy Toole said he believes in basketball gods and they certainly pulled a cruel joke on him this year. In the middle of the season, stating center Mike McFadden and reserve guard Juanie Newton quit the team. A few weeks later, four more players were suspended from school leaving RMU with eight players total.

Then what happens? RMU goes on and dominates the NEC to a 14-2 record only to get crushed in the NEC finals. It really was heartbreaking and you can tell it’s wearing on Toole, who is a young guy with his resume lacking only an NCAA appearance. The NIT did RMU well last year but make no mistake about it, these guys want the NCAA appearance. It’s been somber here.

CRAIG: There was definitely some disappointment last year, but the second that the Kentucky situation came into being, people got over things pretty quickly. And once RMU won that game, the general consensus was that that kind of win, even in the NIT, would be way better than getting waxed by a top team in a 1-vs-16 game.

This year, though, everyone seems pretty deflated. They're grateful for the opportunity to still be playing, especially against a Big East team from a storied program (in New York, no less), but to do everything they did this season only to fall flat in their biggest game of the season...that's pretty tough to get over, no matter how you try to spin it. The program's done really well in Andy Toole's four years as coach, but they have yet to make the tournament in that span. It's something that undoubtedly frustrating for anyone involved with that program. The immediate aftermath of the Mount St. Mary's loss last week was most recent chapter of that saga.

2// After the Kentucky win, do RMU fans feel like the Colonials can really make big waves in the NIT?

CRAIG: Some fans have definitely adopted a "Hey, we did it once, let's do it again" kind of mindset, but a big part of what made that win so special was that it occurred at home and that they were able to be a part of it. For some fans, mostly the ones that aren't as die-hard, the NIT's a little harder to get emotionally invested in this season. It was kind of NCAAs-or-bust for them.

I've talked to some people who think a win this year's likelier than one last year, maybe just because UK was the defending national champion and St. John's is a program that's been a little down the past 10 years. Personally, I think St. John's is a pretty bad matchup for Robert Morris, but some fans figure if the program was able to pull off what they did last season, then there's no reason that something similar can't be done again.

CHRIS: It’s tough to say. This team seems to have been wearing down over the past few weeks and the disappointment of not making the big dance might have some guys mentally checked out. Then again, this team has been surprising us all year. Winning or losing by 20 won’t shock me.

3// What should St. John's worry about from Robert Morris? They've won a lot of close games, obviously, but where are they most dangerous for a high-major club?

CHRIS: It sounds weird to say this, but in a lot of games RMU legitimately has the best player on the floor in shooting guard Karvel Anderson. When you’ve got such an elite shooter you never feel like RMU is out of a game. As a team, Robert Morris is really good at shooting the three ball. That alone will keep them in just about every game.

CRAIG: It probably begins and ends with their ability to knock down 3s. They're among the top 40 teams in the country in 3-point percentage (38.3) and about 30 percent of their points come from beyond the arc. They've caught fire in some games this season -- like when they shot 71 percent in a close loss to a 27-6 Toledo team -- and when they're shooting anywhere around 40 percent from deep, they can hang with a lot of teams. They're a pretty average team offensively (averaging 103 points per every 100 possessions), but that's the one area in which they really excel.

There's a psychological aspect to it, too. Given their NIT experience last year, they've been on even bigger stages, so it's not like they'll be awe-struck. Three of RMU's players are from the New York area, so there's a familiarity with some of the guys on the Red Storm. And, after four team members were suspended and two others left the team back in January, they've only had eight players the past two months and with that has come a sort of "what do we have to lose?" attitude. That can be a dangerous proposition for a favored team.

4// How does RMU get its points? Who should St. John's watch out for, and when is RMU hardest to guard?

CHRIS: The majority of the points will come from Karvel Anderson, the NEC player and a guy who shot 45 percent from three this year. Lucky Jones is a guard who can score from three and gets to the rim, along with rebounds.

Senior Point guard Anthony Myers-Pate has a streaky jump shot and backup point guard Kavon Stewart is lightning fast with no jump shot and is all left. He’s still a joy to watch. RMU is hardest to guard when the point guards are attacking the basket, drawing fouls, and kicking it out for three and playing at a slower tempo.

CRAIG: 3-point shooting is a pretty big part of their offense. They usually have at least three guys dotting the perimeter and do a lot of their work from there.

The main guy to keep an eye on is Karvel Anderson. He was the Northeast Conference player of the year, averaging about 19 points per game while shooting 45.3 percent from 3-point range, the eighth-best mark among qualifying Division I players. He's as pure of a shooter as you'll see in college basketball and he's shown a more developed game this season. He's far from just a catch-and-shoot kind of guy. RMU's probably hardest to guard when Anderson gets going because he's shown an ability to hit shots even when defensive pressure ramps up.

Lucky Jones is the team's other primary offensive option. He's a St. Anthony's grad, so he may be a familiar name for some St. John's fans and he's got a very versatile, diverse game. He's a strong outside shooter, but he's got a long and athletic body that makes him a viable threat down low.

The team's point guard, Anthony Myers-Pate, is a strong ball-handler who can get into the lane and create good scoring looks for teammates. As far as mid-major point guards go, he's also excellent in transition.

5. Defensively, what do the Colonials do effectively?

CHRIS: Andy Toole has always believed in a tough man-to-man style defense… and then this year happened. Toole’s squad couldn’t adjust to the new hand check rules (RMU gave up 80+ points in seven of their first nine) and switched to a full time 2-3 zone. It’s Syracuse-ish in how aggressive it is. You’ll often see the top of the zone stepping out and harassing ball handlers and the corner wings will step up when needed too.

The zone was pretty effective for most of the year, except for the NEC championship game when nothing was stopped. I’m interested to see how RMU defends the high post which was a big problem in their loss to Mount St. Mary’s.

CRAIG: Defense has long been a cornerstone of the program, but after they gave up 81 points per game in their traditional man-to-man look in the first nine games of the season, they made a switch to a matchup 2-3 zone, something they've been using ever since. It was a pretty awkward adjustment at first, but once conference play started, they really grew into it, holding NEC opponents to 99.5 points per 100 possessions.

Their defense, though, is a big reason why RMU's in the NIT and not the NCAA tournament. Mount St. Mary's absolutely carved up the Colonials' zone, finding any sort of gap and always getting the ball to players in space. The Mount shot 61 percent in the game, but it wasn't like they were on a ridiculously hot shooting streak the entire game -- they just got a whole lot of open looks.