Photos below by John Alber.

With the 2014 NBA draft looming, just a few days away, all potential prospects are scrambling to make final impressions on NBA teams. This includes former St. John’s forwards, JaKarr Sampson and Orlando Sanchez.

The NBA Draft will kickoff off Thursday June 26th at the Barclays Center in Brooklyn, NY— for the first time ever. Hopefully the familiar confines will server as potential luck for the St. John’s potential draftees.

In the history of St. John’s University there have been 61 players from the school ever selected in the NBA draft. Hopefully by the end of draft, Sampson and Sanchez will be number 62 and 63. 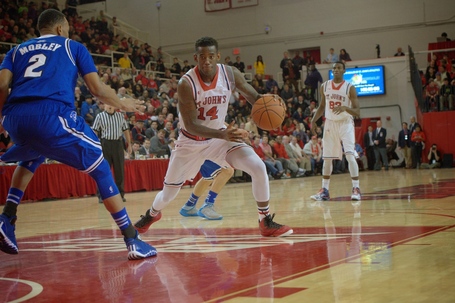 JaKarr Sampson is a sophomore forward out of Akron, Ohio who averaged 13.9 PPG, 6.4 RPG, and 1.1 APG for the Johnnies in his career. Sampson has been on many scouts and GM's radar since his high school days at St. Vincent’s/ St. Mary’s—same school as LeBron James. Sampson came to St. Johns after starring at Brewster Prep Academy in New Hampshire in a pair of prep years.

Since coming to Queens, NY, Sampson produced and was a valuable piece to the team. He won the Big East Freshman of the Year in 2013. This past season he showed more of why he's more of a potential NBA player— producing on both ends of the floor.

Currently, he is preparing for the NBA draft and after every workout he is raising eyebrows from scouts and coaches. One of those teams recently was the Sacramento Kings. By many who attended the workout, Sampson had a tremendous day of output. Sampson might be a possible player of interest as an undrafted free agent for the Kings.

When asked about what he can contribute to the Kings he said, "I can bring my defense. I wanted to show I bring pride to the defensive end. Also I feel I can bring my versatility. I can handle the rock, make plays, and also defend, so I feel overall I can help them out."

Recently, Slam Magazine covered one of Sampson workouts back in his hometown in Cleveland, Ohio. He was asked about what would his focus be on this predraft workout. "Definitely my ball handling and my strength," Sampson said when asked what he is looking to focus on most. "I feel like I’m getting a lot stronger and I’m putting on some good weight."

In addition, Sampson went on to say, "I just need a lot of reps. I’m just getting in the habit of releasing the ball at the top of my jumpshot," Sampson admitted. "A lot of reps and a lot of proper repetition will make things come naturally to me."

It is clear that Sampson needs to improve. Last year Sampson shot 20% from the three-point line - and only took 5 shots from beyond the wing. Maybe more dismal he shot 57% from the free-throw line. If he wants to make a roster this coming season his outside shooting will need to be improve. If he improves he would definitely be on a roster to start the season.

Orlando Sanchez is Mature and Ready 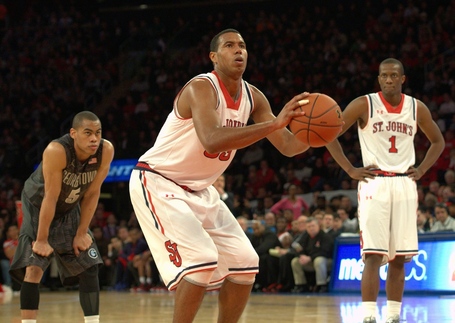 Orlando Sanchez during the 2013-2014 season was one of the more vital players to the team. In his lone season with the Red Storm, Sanchez averaged 7.4 points and 5.6 rebounds.

More important than his statistics, Sanchez brought some salient intangibles to the team. One of those intangibles was his leadership ability. Sanchez also demonstrated a calm and somewhat unselfish attitude— which might have been one of the sparks to ignite the team later on in the season. There is no question his veteran presence will be missed.

Those crucial intangibles might have been developed from Sanchez's upbringing. Granted eligibility to play for St. John’s after intense negotiations with the NCAA, he seems older than 25 because he needed to mature into a crucial role in his family. He dropped out of high school at age 17 to support his family.

Since then he played for 2 years in Junior College, and also for the Dominican Republic—his native country.

Sanchez is projected to be selected from late in the second round or a to be an undrafted free agent. It very likely that he will make a Summer League roster in July.

"Orlando is definitely a sleeper in the draft," agent B.J. Bass, of RBA Sports, said yesterday. "There are definitely teams that have him in the mix, and a lot of people don't realize that he's as close as he is."

Most of the league now is has a big men who can play the stretch 4 position - a player who can shoot from the perimeter but also bang the boards which we saw Sanchez do well on the defensive end. Sanchez will also look to improve on his ball handling. If he's able take larger defenders of he dribble and make plays, he might be more valuable to a NBA team.