St. John's forward Orlando Sanchez signs with Knicks, where the Triangle Offense could use his versatility

Share All sharing options for: St. John's forward Orlando Sanchez signs with Knicks, where the Triangle Offense could use his versatility

Throughout its history, St. John’s has sent many promising prospects to the pros including Chris Mullin, Mark Jackson, Ron Artest aka Metta World Peace, and more recently Moe Harkless.

Now you can add another name to the list as big man Orlando Sanchez has signed a one-year deal with the New York Knicks, likely a training camp invite/ "one year" deal. Sanchez (photo below by John Alber) is the second former Red Storm member to sign a NBA deal this week. Jakarr Sampson Reached an agreement with the Philadelphia 76ers earlier this week. 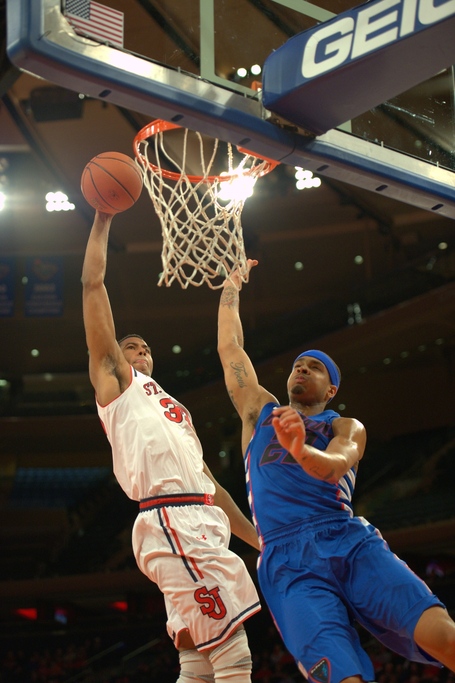 During his short time at St. John's, the big from the Dominican Republic provided size and offense for a young Red Storm team.

While Sanchez only spent a brief time at St. John’s, his agent, Brian Bass, believes that this time played a crucial role in his development.

"Anytime you get an opportunity to play a high level of competition at the Garden that certainly prepares you for the next level," his agent said.

College isn’t the only preparation Sanchez has had for the next level. Fortunately for Sanchez, he has how the opportunity to play against some of the best international competition in the world. This summer, he represented the Dominican Republic in the FIBA World Cup where he averaged 2.2 points and 2.5 rebounds.

The Knicks currently have eighteen players attending training camp this fall which means that Sanchez will have to work hard to earn a spot on Derek Fisher’s roster.

One positive for Sanchez is that he possesses many qualities that are essential to the Knicks new offense, the triangle. He is a good passer and an above average shooter for a man his height.

"I think he will be great in the triangle," Bass said. "Orlando can really pass the ball. It is scary how good a passer Orlando is. He is versatile big that can shoot, pass, and block shots. He has been compared by a lot of NBA people to a more athletic Boris Diaw," his agent said.

Sanchez is a longshot to make the Knicks roster and most likely will be forced to spend sometime in the D-league, an assignment Sanchez would accept. However, getting to this point is still a huge achievement for Sanchez.

A short time ago, Sanchez was a carpenter living in the Spain and then back in the Dominican Republic, helping support his family. Now he has the opportunity to play in the best basketball league in the world.

"Orlando has an understanding that this is a tremendous opportunity to make the league. He has come a really long way from Monroe to St. John’s it has definitely been a long road for him," his agent said. "He is really excited about the opportunity."