The Expressions Elite AAU forward has garnered lots of interest.

Per the Recruit Scoop and Fox' Evan Daniels, St. John's has offered a basketball scholarship for 2014 to highly regarded Abdul-Malik Abu.

Abu is a physical specimen with a powerful build and the high motor to maximize his physical tools. He's a bit of a throwback power forward type in that he's a banger who thrives by throwing his body around on the inside, crashing the glass, and doing the dirty work. 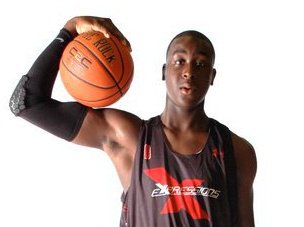 (photo via yesuconn) The description adds that he is lacking a bit of skill, offensively is only effective around the rim, and is generally raw. Florida, Seton Hall, Rutgers, Providence, Wisconsin, Connecticut, and many others have expressed interest or made offers.

Abu is from Boston, and attends New Hampshire's Meriden Kimball Union Academy. His teammate Jared terrell may want to come with Abu... or Abu may want to go to college with Terrell.

As the roster stands, St. John's will lose Orlando Sanchez, Marc-Antoine Bourgault, God`sGift Achiuwa, and possibly JaKarr Sampson if he chooses to go pro after his second season in the red and white (and black or gray for special occasions).

The 2014 team should have a number of solid seniors to build around, but few big men; Christian Jones is the only forward projected to be on the roster at that point. (ed note - yes, I forgot Chris Obekpa will be a junior that year as well.)

He plays for the Expressions Elite AAU team (Nike).