The highly-coveted combo guard is headed to Queens for the 2013-14 season.

Share All sharing options for: Rysheed Jordan commits to St. John's, per report

With one scholarship available, Steve Lavin has got his man.

Rysheed Jordan, a highly-coveted 6'4" point guard from Vaux Roberts High School in Philadelphia's Public League, has committed to St. John's. Jordan is ranked as the 22nd ranked recruit in ESPN's rankings, 29th on Yahoo, and 53rd on Scout.com. He also considered UCLA and hometown Temple Owls.

He announced via Reggie Rankin - one of ESPN's main recruiting writers - on Twitter, ending what seemed to be this week's most poorly-guarded secret.

BREAKING NEWS: I have spoken with @rysheedjordan he has committed to St. John's It's Official Full Story and Analysis coming @recruitingespn

And from Rysheed himself:

Mutual interest between Jordan and the Red Storm became public last July, and he visited back in September. He enjoyed the visit, but didn't show his hand. Steve Lavin and Tony Chiles remained diligent and chased Jordan whenever they could, even popping up in one of his highlight videos, in a prominent position on the sidelines for Jordan's game against Imhotep.

Recently, Jordan mentioned how much he enjoys the bright lights of New York City; the exposure and electricity draws another player.

Assuming he takes classes this summer (and is academically eligible - St. John's fans know that's not always a given!), Jordan should also be eligible to play on St. John's foreign tour (locations TBA) this summer.

He puts up buckets, and is a slick passer.

Rysheed Jordan is a guard who is used to having the ball in his hands. He's an athletic, bouncy lead guard who can get his own shot and attack the rim, drawing fouls. Scouting reports note that his consistency with his outside jumper is an area for improvement, but in his games, he seems to have good form and good control with his pull up. 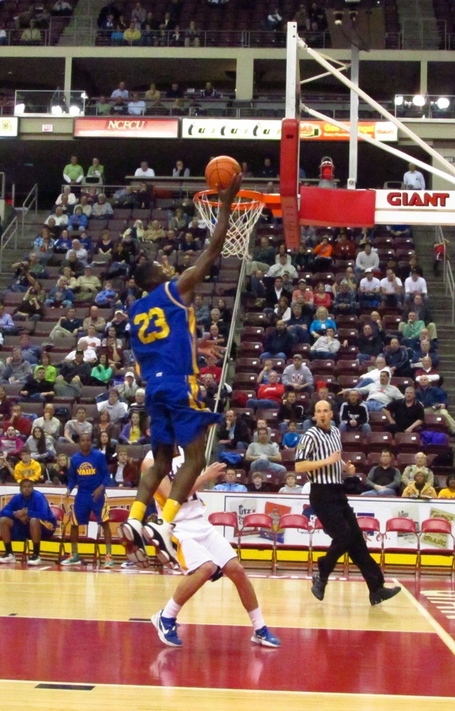 On the high school level, Jordan was able to break down opponents and snake deep into the lane. In college, when the offense breaks down, he looks to be able to create options for a last-second attempt - the long jumper, the pull-up, or the drive to the rim.

Want to see more? Jordan will play in the Derby Classic on April 19th in Louisville, Kentucky.

Yes, the Johnnies have guards - assuming he comes back, D`Angelo Harrison is one of the more prolific scoring guards in the NCAA. Fellow guard Phil Greene IV is a tough gamer, Jamal Branch has size and passing skill, and Felix Balamou is a high-level athlete developing his skill set.

Still, Jordan brings new skills to the Red Storm and should make what was a poor offense much more explosive.

Jordan's presence enhances the team with his ability to get to the rim. St. John's was dependent on the mid-range shot from PGIV and JaKarr Sampson, and had one deep shooter in D`Angelo Harrison, who struggled badly in February.

The team offense foundered once Harrison was suspended from the team. But even before Harrison's suspension, the squad was unable to score from outside of the arc or at the rim, the two most efficient spaces on the floor.

Until the Red Storm can prove that they have multiple capable shooters on the floor, the team will still be vulnerable to zones, depending on what Marc-Antoine Bourgault and Max Hooper can bring (and how long they can stay on the floor).

Barring any more transfers, the Red Storm are at a solid 13 players, a full complement; but there is still time for more roster motion on the squad. The Rumble will be keeping an eye out for any new developments.

Rysheed Jordan on his passing and game.

(may not be visible on some devices.)

And if you've really got time, here's a full game on You Tube, the 1-point loss to Brandon Austin (Providence commit) and Imhotep.