JaKarr Sampson, your 2013 Big East Rookie of the Year winner

Sampson averaged 14.9 points and 6.6 rebounds during his first regular season with St. John's.

Share All sharing options for: JaKarr Sampson, your 2013 Big East Rookie of the Year winner 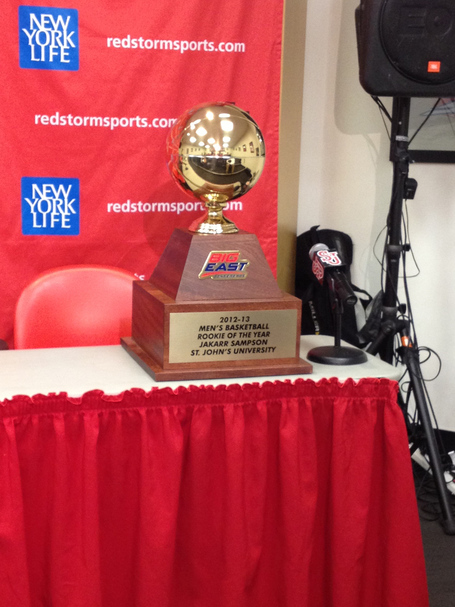 "It would have been interesting to have Harkless with this group this year, but we're pleased to have players who are recognized for their abilities and accomplishments," Steve Lavin said. "JaKarr has a bright future and it's nice that he is receiving these accolades. We'll come back next year and have a chance to be part of something really special."

This year, Jakarr's coronation was a transition slam dunk. Sampson averaged 15 points per game in Big East play - a slight uptick from the 14.7 points he averaged in non-conference play, taking a slightly larger role in the offense as defenses looked to take away St. John's sophomore scorer, D`Angelo Harrison.

Down the stretch, with Harrison suspended for conduct detrimental to the team, Sampson has been the focal point, scoring 17 points per game (45% FG shooting) and adding six rebounds (around his season average of 6.6) with a block and 1.7 steals per game in his last three.

Sampson has at times been included in the same breath as NBA Draft projections this season, similar to how Harkless was throughout his freshman campaign a year ago. Scouts seem to be advising Sampson to play another year at St. John's before turning sights toward the professional ranks, yet Harkless' rookie success with the Orlando Magic certainly makes all endpoints possible.

"I don't want to just go to the NBA; I want to be a pro in the league. I want to be an All-Star and be there for a long time," Sampson said on Tuesday upon receiving the award. "I wont go to the NBA unless my game is ready for it. I still have a lot of growing to do. I'm not in any rush to make a decision."

Lavin says he'd be surprised if the Red Storm did not have Sampson for at least another year, but he fully supports any decision a player makes regarding his future. He's not into getting all "salty" about it.

JaKarr's 14.9 points per game (12th overall Big East) and 6.6 rebounds (also 12th overall) ranked him first among the league's freshmen. He also ranked 10th among the conference's top shot blockers with 1.7 swats per contest. Villanova guard Ryan Arcidiacono (12.2 points per game) was the next freshman down the list at 28th in conference scoring.

The solid year Sampson has experienced at St. John's has made many forget about the difficulties he had becoming eligible to play for the Red Storm. After being deemed academically ineligible to join the team last season with Amir Garrett and Norvel Pelle, the heralded forward spent a year at Brewster Academy while remaining loyal to Steve Lavin and the program.

"It hurt a lot [to not qualify,] because you want to play college basketball and that was one of my dreams," Sampson said. "This award means a lot because it shows that all of my hard work and dedication paid off. It will be a good step forward to me."

Sampson's patience and loyalty mirrored that of Orlando Sanchez, who will play for St. John's next season after sitting out this year waiting for NCAA eligibility, and Garrett, who was announced as academically ineligible alongside Sampson and joined the team months later.

If Sampson does choose to return to St. John's for his sophomore season, he will undoubtedly be part of one the strongest front-courts in America with Sanchez and Chris Obekpa. Sampson and Obekpa were each awarded with All-Rookie honors on Monday.

The star freshman's work isn't quite finished in 2012-13, as St. John's will meet Arcidiacono and the Villanova Wildcats on Wednesday night at Madison Square Garden in the conference tournament's second round. Win or lose, the Johnnies are likely to receive an invitation to the NIT.