The season isn't quite over yet for St. John's, as the Johnnies have been selected to the NIT for the first time since 2010.

Share All sharing options for: NIT bound: St. John's selected as 5-seed, to play at St. Joseph's on Tuesday

The dust has settled. The bubbles have burst and the 68-team field has been determined.

Despite a disappointing conclusion to the spiraling downturn that has been the St. John's 2012-13 season, the Red Storm are headed to the postseason. Except Steve Lavin's team isn't one of the 'Lucky 68', but rather one of the 'Next 32.'

The Johnnies have been selected to this year's National Invitation Tournament (NIT) as a five-seed and will travel to Philadelphia to face St. Joseph's on Tuesday night at 7pm. The game will be televised ESPNU. 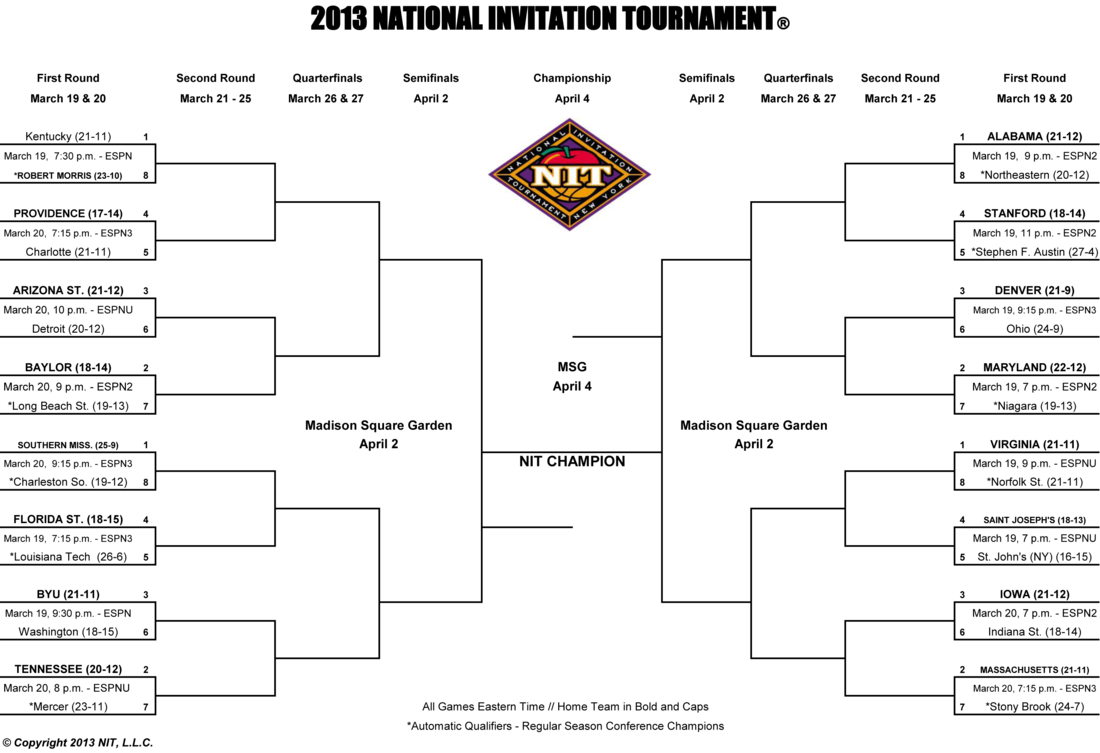 St. John's lost seven of its final eight games in February and March after starting 7-4 in conference and being included in preliminary talks for an NCAA Tournament bid.

Instead, the Red Storm struggled mightily as its schedule toughened and its leading scorer was suspended for the remainder of the season, with the pain culminating in a quick exit from the Big East Tournament at the hands of Villanova on Wednesday.

But more basketball is on the way for the Johnnies, beginning on Tuesday. St. John's will have a very quick turnaround as it begins its quest to get to the NIT Final Four at Madison Square Garden on April 2nd.

"Once again, the Committee has come up with an outstanding field of strong teams with outstanding credentials," said C.M. Newton, who is serving his ninth year as chair of the NIT Selection Committee. "In addition to the at-large bids we handed out, we're excited to reward ten regular season conference champions as automatic qualifiers to play in the NIT."

If the Red Storm is able to get by St. Joe's, it will likely have the top-seeded Virginia Cavaliers waiting in the wings in the second round. UMass and Iowa are the two next-highest seeded teams in the Johnnies' bracket.

With the selection, St. John's will be participating in its record 28th NIT. Its last appearance was three years ago in 2010, when the Johnnies were closely beaten in the first round by Memphis. It was the final game coached by Norm Roberts before he was fired two days later.

St. John's and the National Invitation Tournament are virtually synonymous, as the two go back to 1943 and 1944 when St. John's won back-to-back titles under legendary head coach Joe Lapchick. The tournament is the oldest that college basketball has to offer, and had been considered the highest-regarded postseason event until the NCAA Tournament eliminated its one-team-per-conference rule and expanded its field in the mid-1970's.

The opportunity to play against St. Joe's this week will provide each of Steve Lavin's young Red Storm player a chance to absorb a first postseason experience. Though participation in the NIT is not the program's ultimate season goal, it could prove beneficial for the team as it moves toward offseason months and a critical 2013-14 season.

"Making the NIT is another step forward for our program. Last year we finished 13-19 with six Big East wins. This season we finished 16-15 with eight Big East conference victories," Lavin continued. "Our focus now is preparing for a tough road game against St. Joseph's."