In the papers: reactions from St. John's 62-59 loss to Providence

St. John's season now rhymes with "NIT" unless the Johnnies can knock off a pair of ranked teams in the next week.

Share All sharing options for: In the papers: reactions from St. John's 62-59 loss to Providence

There were positives to be taken from St. John's loss to the Friars... but the final result of an L in a game that could have been stolen on the road begs the "what if" questions without D`Angelo Harrison on the floor.

After last night's 62-59 loss (with many Red Storm fans in the house), the Johnnies have a road trip to South Bend, Indiana to take on the Notre Dame Fighting Irish, who are much tougher at home than they are on the road.

"I'm proud of our players. I thought they competed well," Steve Lavin said afterwards. "It's so difficult to win on the road in the Big East. There's a razor-thin margin for error."

Bryce Cotton made a three-pointer as he was fouled to give Providence the lead back (57-55) with 3:46 to play. Another Cotton jumper with just over two minutes left gave the Friars its largest lead to that point.

"[Cotton] did what he does. He has that gun-slinging mentality, like an Eddie House," Lavin continued. "He's a special player. Even if you contain him for a stretch, he's always about to start tickling the twine."

Also: a graphics fail by ESPN, who miss D`Angelo's smile, apparently. (Hat tip to Tim Dimas for catching this when I missed it.) 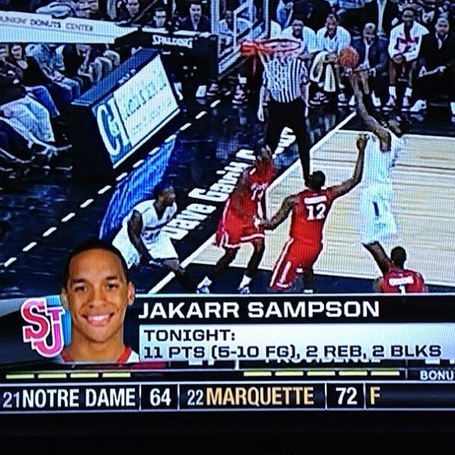 The Johnnies did an admirable job trying to compensate for their star’s absence in what had become a must-win Big East game against Providence. But they lost a three-point lead with less than five minutes left, couldn’t make a shot in the late going and fell, 62-59, before 10,560 at Dunkin’ Donuts Center.

St. John’s (16-12, 8-8) has been considered an NCAA Tournament bubble team for weeks now, but may have to do some work just to get back on it. The Johnnies have lost four of five and they have two remaining regular-season games against nationally- ranked opponents plus the conference tournament. But for the first time this season, the always-optimistic Lavin actually uttered "NIT" during a a news conference.

JaKarr Sampson, who admitted to feeling extra pressure without Harrison, missed a 3 with four seconds left that would have forced overtime. The Johnnies were a woeful 1-for-11 from behind the arc. Providence was 7-of-22 if you looking for a statistical key.

Felix Balamou, who had become a forgotten man on the bench, played 22 relentless minutes. But his lack of experience burned the Johnnies when he fouled Bryce Cotton on a 3 with 3:46 left. The four-point play swung the game.

Cotton made his final trey as he was fouled with 3:46 remaining. "God gave us that win," coach Ed Cooley said. "We were supposed to win today."

"There were a number of positives we can build on, but in the end Providence's rebounding edge was the difference. I liked our team's cohesive approach and competitive fire," said St. John's head coach Steve Lavin. "But it's difficult to win on the road in this league against a hot team if you're outrebounded by nine."

The Red Storm's difficulty from behind the 3-point line, missing all five attempts in the first half and finishing only 1 of 6 in the second, gave the Friars a big leg up as they nailed 7 of 22 attempts throughout the game.

Providence was able "to go from 2-7 to 8-8 and really is the hottest team in the league other than Georgetown," Lavin said. "In my book (Ed Cooley) is the Big East coach of the year runaway."

Cotton explained his improvement from the beginning of the season by noting "the sense of urgency" that came after the Friars' initial losses.

After a 2-7 Big East start, the Friars have rallied to a .500 record in the conference and moved into position to play in a postseason tournament (NIT or even NCAA) with two games left in the regular season.

PC coach Ed Cooley marveled at his team's improvement, not only in execution but also in toughness, after a rocky start dominated by a slew of injuries.

"I want to say that on December 29th or 30th, there was a lot of doubt about our program," Cooley said of a point where the Friars had lost at Boston College and Brown. "These young men deserve a lot of credit because there were times when everything looked really, really bad. We still have a long way to go but for where we are right now these kids deserve a lot of credit."