Steve Lavin brought his mentor on board at St. John's before his first season in Queens.

You can accomplish a lot from little-known Lafayette, Indiana.

Gene Keady, who won 550 games in a career defined by 25 years as head coach of Purdue, has been elected to the National College Basketball Hall of Fame. He will be inducted on November 24th in Kansas City.

"I am very humbled and happy to be inducted into the Collegiate Basketball Hall of Fame," Keady said. "Throughout my career, I have been fortunate to have been surrounded by great student-athletes, outstanding coaches, a supportive family, and so many individuals that I would like to thank and share this award with."

Keady is highly respected within the college basketball world, even eight years after he stepped down from his position at Purdue. After a year as an assistant with the Toronto Raptors in the NBA, Keady took a few years off thinking that his coaching career was over.

Then he received an unexpected call. One of his former graduate assistants, St. John's head coach Steve Lavin, inquired about having Keady join his new Red Storm staff as a special assistant.

He's been in Queens ever since, spreading his unbounded knowledge of basketball with St. John's athletes and fellow coaches during the three years in which Lavin has served as head coach. He isn't as fiery as Purdue fans may remember from his days on the Boilermaker sidelines, but his passion for the game is just as strong as it has ever been.

Keady's stint with St. John's is just an epilogue to one of the greatest coaching careers his profession has ever seen. If you add his time spent coaching high school, junior college, and USA basketball with his 27 years as a college head coach (two at Western Kentucky from 1978-80), Keady has amassed 879 total wins.

"This election validates Gene's body of work here and at the places he coached preceding Purdue," Boilermakers Athletics Director Morgan Burke mentioned in a school release. "It reinforces his philosophy of caring about individual student-athletes, both while they were here and after they'd moved on from Purdue." 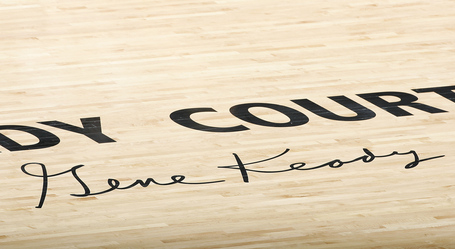 "Aside from being one of the greatest ever to coach the game, Coach Keady has been a mentor for so many men who played for him at Purdue," Painter mentioned. "His accomplishments speak for themselves and his name remains synonymous with Purdue basketball. I'm thrilled to see him receive this well-deserved honor."

Now, Keady is enjoying a much different lifestyle than the one he lived in Lafayette. Fast-paced New York City is where he calls his in-season home now, where he's getting the opportunity to place his fingerprints on the up-and-coming St. John's program.