Lapchick coached the then-Redmen during two stints over the course of four decades.

It was only a matter of time until St. John's properly honored perhaps its greatest legend.

A group of university alumni are actively seeking to raise the funds to erect a statue honoring legendary basketball coach Joe Lapchick on the St. John's campus.

The process has been in the works for years, and is now gaining steam. 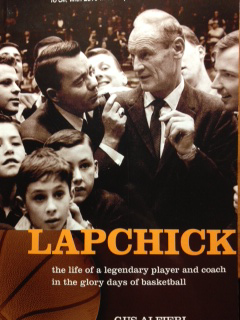 Ever since Gus Alfieri released his tirelessly researched biography, Lapchick, in 2006 and St. John's basketball celebrated its 100th year in 2008, attention has redirected toward the tremendous accomplishments Joe Lapchick accumulated in a life of basketball that ranged from 1923 until his death from a heart attack in 1970.

When you think of the history of St. John's basketball, you may be initially drawn to the years of Lou Carnesecca's reign - notably the 1985 run that found the Redmen in the Final Four. They have even renamed the venerable Alumni Hall as Carnesecca Arena within the last decade.

But the supposed "glory days" would never have been possible without the foundation set by Lapchick in the years preceding Carnesecca. In those days, four National Invitational Tournament (NIT) titles - a record - spoke for themselves.

Heck, those days were really the "glory days" of St. John's basketball.

"[Joe Lapchick] is one of the coaching greats. He was a guy who had a lot of foresight about the game," Hall of Famer and Knick legend Walt "Clyde" Frazier mentioned at the event on Thursday. "He was a pioneer."

The proposed statue is slated to sit on the St. John's Queens campus, likely in front of Carnesecca Arena, as a reminder of the legacy Lapchick has left behind and has carried on for almost fifty years after the last game he ever coached, an upset win over Villanova in the 1965 NIT championship.

"[Lapchick] was not only a coach, but he was a man - a gentleman and a father figure to everyone," stated Jack Kaiser, who played under Lapchick at St. John's before eventually serving as the school's athletic director and a founding father of the Big East Conference as AD. "He was not a college graduate, but he was noted for his ability to get the best out of everyone."

Lapchick is widely remembered for his success as a coach both at St. John's and with the Knicks, yet it may not have been his greatest impact on the game. He is credited for his heavy contribution to the breaking of the racial barrier in professional basketball, something that has undoubtedly shaped how the game has evolved until today.

The event included a dinner, a question and answer session and speeches given by the author of Lapchick, Gus Alfieri, and two of Lapchick's children - Barbara and Dr. Richard Lapchick.

"I learned all of my values about diversity and ethics from my father. He was obviously a great coach and player, but he was even better as a dad and person," Richard, a human rights activist and racial equality pioneer in his own right, reflected to a group of over a hundred supporters. "For him it was not about a basketball game, but about a vision for what America could someday become."

The alumni group heading the project estimate that the statue will cost anywhere between $100,000 and $120,000, of which only about $60,000 had been collected before Thursday.