A look at the St. John's Red Storm's leaders and best games before we delve into individual analysis.

We trust that you have read the earlier Red Storm in review posts? If not, click on the links in the image below for the Stat Analysis and Fans sounding off on the season. 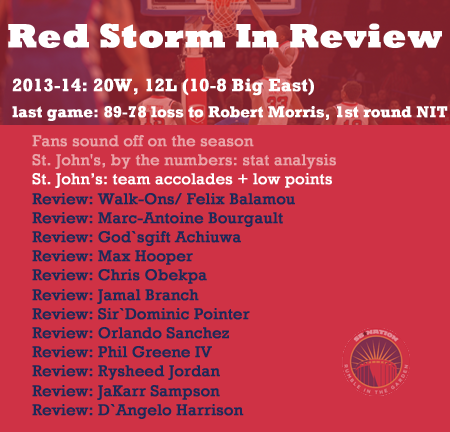 D`Angelo Harrison led the Red Storm once again in scoring, though his efficiency continues to struggle. Harrison does earn points at the free throw line - getting there frequently and converting frequently, making him one of the Red Storm's most dangerous offensive players, despite missing a high number of shots inside the arc.

Jakarr Sampson shot just under 50% from the field, supplementing his penchant for long pull-up two-pointers (which he shot reasonably well, considering the general inefficiency of those shots) with dunks and putbacks.

Rysheed Jordan improved as the year went on, especially at driving to the rim. His confidence in his three-point shot improved, judging by the increased number of attempts - even if the shot didn't always fall. Note his increased efficiency in conference play - and maybe, just maybe, he's able to take some of the creative scoring burden off of Harrison for a top-scoring backcourt duo.

Three of the team's four top rebounders are gone from last year. By raw rebounds-per-game numbers, D`Angelo Harrison was in the top three:

But by rebound percentages, God`sGift Achiuwa and Chris Obekpa were the team's strongest rebounders on the defensive end (offensive rebounds, to a certain extent, are a coaching scheme choice that Steve Lavin and his staff generally choose to avoid, and so are not included). Rebound percentage is the percentage of opponent missed shots that a player grabs while on the court:

There are a lot of rebounds available for Keith Thomas, Christian Jones and Adonis Delarosa.

As for assist rate, which should reflect the team's best passers, we look at the assist rate - the estimated percentage of team shots assisted by a player when he is on the floor.

St. Johm's, as you know, has an elite shot-blocker in Chris Obekpa. But God`sGift Achiuwa showed out well, and on other teams, Orlando Sanchez and Sir`Dominic Pointer would be seen impressive at shot-blocking. On this team, they're just part of a shot-swatting defense that elevates the Johnnies interior D into one of the best in the Big East. Block percentage is the percentage of shots blocked while a player is on the floor

Sir`Dominic Pointer can get out of position trying for steals, but he is still excellent at forcing turnovers. Jamal Branch, though, came on in the second half of the season, as did Rysheed Jordan.

For sheer comeback-ability, the Johnnies victory over Georgetown in Madison Square Garden in February was a high point. The Johnnies pounded the Hoyas early and often, defeating a team that had done a great job in the past two years of crushing the Red Storm at home or on the road.

Rysheed Jordan scored a career-high 24 points to lead the Johnnies.

The 89-78 loss to Robert Morris was far worse than the final score indicated. Loosing Max Hooper (18 points on 12 shots) and Marc-Antoine Bourgault (6 points on 4 shots) helped the Johnnies claw back into contention. The Red Storm were down 16-2 to the Robert Morris Colonials, after Jakarr Sampson grabbed forward Lucky Jones by the throat after fouling him.

But that performance should live in lore - an unattentive, lackluster performance team without Rysheed Jordan expecting to win because... of the name on their jerseys?

Five games, between December 31 and January 16.

The Red Storm began with lackluster non-conference performances, struggling to score unless the team could get to the rim. And then... something happened to the defensive rebounding.

The Johnnies allowed teams to grab 39% of their own misses, and those putbacks nullified the Red Storm defensive strengths in road losses to Xavier and DePaul and home defeats to Providence and Villanova. Against Georgetown, the Hoyas got so many easy looks that there weren't offensive rebounds to give up. (D`Vauntes Smith-Rivera, in particular, took advantage of Rysheed Jordan and others' propensity to go underneath screens, playing the deadly shooter Smith-Rivera as if he was going to drive to the rim.)

St. John's defeated Marquette, Georgetown, and then 12-ranked Creighton at home, while also dispatching Butler at home and Providence and Seton Hall on the road. The Seton Hall game was a nail-biter in front of a few hundred fans with a snowstorm raging outside, and the Creighton game was only won by five point. But the other four wins came with healthy margins of 10 points or more.

This streak vaulted the Red Storm back into contention - until the paint-protecting defenses of Villanova and Xavier held the Red Storm to 54 and 53 points in consecutive games.

What are your bests & worsts from last season?