Looking back on the French scorer who came with Orlando Sanchez, but found himself riding pine for much of his career in Queens.

Share All sharing options for: In review: Marc-Antoine Bourgault

In many of the team's better games against top opponents, the Red Storm remain competitive with incredible efforts on defense - holding down Villanova for a half at the Garden, shutting out Trevor Cooney of Syracuse, making Doug McDermott work for his points, and the like.

But there comes a time when the ability to shoot the three (or draw a foul) is essential to bulging a lead - or keeping pace with opponents.

And so, the Red Storm brought Marc-Antoine Bourgault in to be a savior from outside of the arc, the kind of player who could specialize in long-range sniping and open up things for the other players underneath. 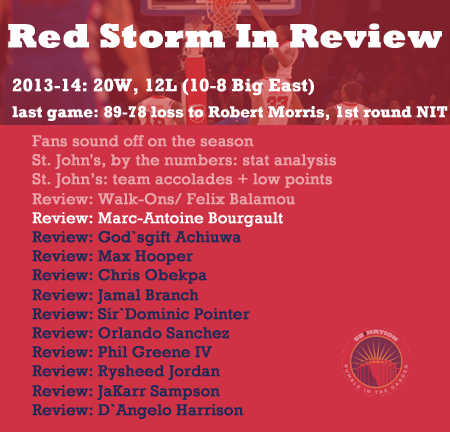 But the Johnnies continue to remain ranked near the bottom in three-point shooting attempt and accuracy; Bourgault had some time in his first season but was relegated to the bench.

Bourgault had few opportunities to shine with St. John's. Part of the problem was limited and staccato bursts of playing time, where he would be yanked after missing a defensive assignment. And part of the problem was that Bourgault wasn't reliably quick enough to find shots within the Red Storm offense, which often caters to players who can create their own shot or run in transition.

Maybe he was a weapon. Or maybe he was the inaccurate player who shot 3/11 against Marquette in the Big East season finale in Madison Square Garden in 2013, when D`Angelo Harrison's suspension made plenty of shots available.

Good luck to Marc-Antoine Bourgault, now playing for Lille in France's Pro B league, where he has played in both of the team's regular season games - three minutes in the season opener, a loss to the Antibes Sharks, and 18 minutes in a blowout over Aix Maurienne Savoie Basket, where he scored 17 points with seven rebounds.

What does the absence of Bourgault mean? Steve Lavin had Bourgault planted firmly on the bench, so Bourgault's loss will have a negligible effect on the St. John's Red Storm this coming season.

He was a threat to stretch the floor, and the Johnnies will have to find other players to be three-point threats - like Bosnian newcomer Amar Alibegovic, Phil Greene IV (who shot well from beyond the arc last year) and other returning guards.