In review: God`sGift Achiuwa, whose minutes came and went

Share All sharing options for: In review: God`sGift Achiuwa, whose minutes came and went

With a year off in between seasons, and a number of well-touted forwards taking the minutes he enjoyed, it was easy to imagine that God`sGift Achiuwa would get lost in the shuffle.

And at first, he was the same as he was before - a big body, not terrible on the offensive glass but curiously missing on the defensive boards. A player who hustled but didn't have the jumping athleticism of some of his teammates. A player with poor hands that affected his offense.

And God`sGift was logging six minutes, nine minutes, three minutes and seven minutes in the first four games, mostly against the low-level teams, and it looked to be that Gift was going to be a veteran who leads from the sidelines. 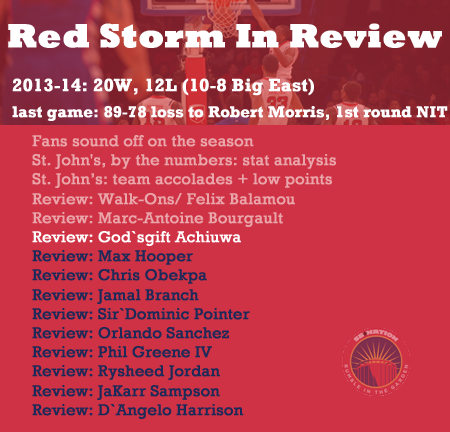 But somewhere along the way - and maybe it was just some level of frustration with the efforts of the Red Storm's other big men, or a need to rest players - Achiuwa saw time as a strong defensive post, a player willing to hustle and stay in the paint.

The double digit games, however, came and went - three games with 10 or more minutes were followed by a DNP-CD in the Syracuse game, an average of nine minutes against Youngstown State and - instead of trying to describe it, I'll just make you a picture.

The upshot: Lavin saw Achiuwa as a good matchup against Providence, DePaul, Butler and Marquette (though the length of the Marquette and Providence games - both double overtime - is a factor). And Achiuwa played reasonably well, stayed within himself, and was a very good defensive rebounder in those limited minutes.

Could the Johnnies have kept Xavier or Villanova off the boards with more Achiuwa?

And in truth, the Red Storm's problems in those games boil down to an inability to score against well-managed packed in half-court defenses.

And Achiuwa's erratic minutes were part of a team that struggled to find the formula of players and plays that worked, especially early in the Big East season.

What does the absence of Achiuwa mean?

Steve Lavin no longer has a possible defensive safety blanket on the bench for the front court. Lavin turned to Achiuwa down the stretch of the DePaul game on the road and against Providence, looking for a spark. But Achiuwa didn't bring the multi-faceted talents of Orlando Sanchez and Jakarr Sampson to the court.

The maturity of Achiuwa - a player willing to step in and play hard even if he had seen spot minutes for weeks - has value as well, and his awesome name and impressive frame was good for a few minutes to stabilize the post.

What's left for St. John's is a lot of question marks - who will spell Chris Obekpa? Can the newcomer bigs play strong minutes and not give up an inch in the paint to big men?