A look back on the twice-almost-redshirted Balamou, and the walk-ons, along with Christian Jones.

Felix Balamou wasn't even supposed to be so prominently featured in this group.

These in review posts look back on the season that was - and ahead, ion the context of each player. Click the title of this section OR the links in the red box (if you're reading on a computer or tablet) to explore the posts we've already published.

Before last season, St. John's looked to have a stacked roster, one that could almost go three-deep with talent and matchups, filled with experience and coming off of a trip to Europe to help team bonding.

And Balamou, who did not play in Europe, looked to be a bench player with the exciting shooters and dynamic talents who would be eligible - Orlando Sanchez, Max Hooper and Rysheed Jordan.

So, like early in the previous season, the raw but athletic Balamou was slated for a redshirt season. Walk-on David Lipscomb, who played significant minutes at the end of the previous season, was also given a redshirt. Christian Jones sat out the year. And newcomer Khadim Ndiaye, another walk-on, was scheduled to play along with walk-on Tyler Walston. 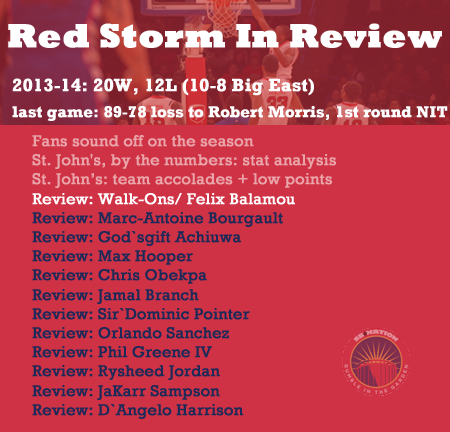 But by December, the team was struggling a little. Rysheed Jordan, already suspended for a game, was home dealing with his sick mother, and Steve Lavin activated Felix Balamou.

Lavin told the media after the Youngstown State/ Ugly Sweater game, where Balamou played, "Felix had been playing so well in practice. His ankle injury [suffered during the end of the previous season] has healed quicker than expected and his performance has continued to improve. It became more evident Felix can help us at both ends of the floor."

Balamou played against Youngstown State for ten minutes, got three minutes against Columbia, five against Xavier (including a nice fast break assist). Then he got his chance to shine against Georgetown.

Down 1-0 in the Big East standings, Steve Lavin was unhappy with the effort and execution against Xavier (and reportedly in practices), and started a lineup with Balamou, walk-on Khadim Ndiaye, sixth man Sir`Dominic Pointer along with D`Angelo Harrison and Orlando Sanchez.

It didn't spark a win (or even a win in the next three games), nor did it generate a faster start, but it was Balamou's and Ndiaye's time to get some run.

Balamou had another assist, a steal, and a pair of rebounds, but didn't make a huge impact on the game. And he didn't play the rest of the season; he went home to Guinea to be with his ailing mother and came back and stayed on the end of the bench.

Ndiaye hit a confident jump shot in his seven minutes and played with some tenacity, but neither turned the season around.

And that's to be expected.

The intrigue around Felix Balamou isn't about his ability to score - low possession-users tend not to become scoring superstars - but in the strong athleticism that he brings to the team as a complementary piece.

Next season's fit - Felix Balamou: Balamou will likely see few minutes, barring injury. But when he's on the floor, the question about his game is whether he can turn that ability to jump into the rafters into an all-around strong defensive package, coupled with smart basketball.

His assist percentages coupled with his low usage rate could be a hint that he does not have some of the tunnel vision of the Red Storm's offensively-minded players, which could be a benefit. And his defensive athletic markers - high steal rate and high block rate - could indicate a promising defender.

Next season's fit - Christian Jones: another very good athlete, Jones "hit a wall" his freshman season after some personal tragedies. An undisclosed injury kept Jones out last season. This year, he is one of many who have a chance to earn minutes in the wake of the departures of Jakarr Sampson, Orlando Sanchez and God`sGift Achiuwa.

At 6'7", 225 pounds, Jones has to decide whether he is a perimeter player or a paint player. His bio highlights skills in the basket area, and he says the same; but his on-court play has taken place in the mid-range, with Jones taking jump shots, shooting 45%, and with few rebounds or foul shots to show for his efforts.

However, on the current roster, playing as an outside-in forward may fit. The Delarosa brothers are paint players and according to scouting reports, so is forward Keith Thomas.

What's changed in his game in the last year? We will find out. We do know he's not entirely unwilling to shoot - and when it's working, as against Marquette in the regular season finale in 2013, he can put up some points.

Next season's fit - walk-ons: David Lipscomb was used late in the 2013 season as a ball handler, while D`Angelo Harrison was out. Lavin must have seen some potential in him; he logged 15 minutes in the road loss to Virginia in the NIT and played in the Big East Tournament. He has one assist and zero points in 29 career minutes.

Khadim Ndiaye brings some athleticism and depth, but his minutes have been too limited to determine what he can provide to the Johnnies. Ndiaye and Walston are practice players; but given their height (6'5") and Steve Lavin's penchant for mixing up lineups to get the effort he wants, who knows - we could see them play again.

Newcomers Myles Stewart and Jay Henderson could cut into their time; Stewart is said to be a solid shooter, and the team needs players who can stretch the floor.