In review: can D'Angelo Harrison carry St. John's to the NCAA Tournament?

D`Angelo Harrison is still key to everything St. John's does.

Share All sharing options for: In review: can D'Angelo Harrison carry St. John's to the NCAA Tournament?

D`Angelo Harrison is the most recognizable face on the Red Storm - a four-year player who has averaged 17-18 points per game every single season. In many ways, he is the essence of consistency - even as he has matured into a team leader.

D'Lo is a player who has taken the refuse-to-lose attitude he came up with and honed into something that doesn't include yelling at teammates or coaches, the kind of fierce competitor that deserves a national stage. He's got a great story, a beloved brother in prison, a caring family, a redemption narrative, incredible on-court aggressiveness and a LOT of points.

If only he and the Red Storm could get to the NCAA Tournament, Harrison - would be loved and hated, part of the pantheon of great college players that make fans go "aw, damn, him again?"

What can D`Angelo do even better to carry the team there? 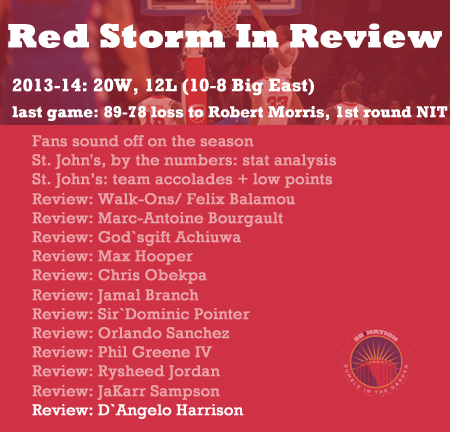 St. John's needs a fast start - and to impose its style of play tonight.

Jakarr Sampson was thought of as a scorer, but his athleticism was a key component of the Red Storm defense.

There's a point in a players' career where the coaches and fans and teammates accept that said player is a volume shooter - the kind of baller who can't help but take shots, courageous, ridiculous, uncalled-for shots, and think he or she can make every one.

With multiple 30-point games in his final AAU season, Harrison was known to be a gunner, a player who played every position in his high school and was a little insane about winning.

In college, even as his insanity became more focused with some help - getting kicked off the team and working on anger management with John Lucas and Mike Rice, who also had anger problems - his shot-taking has barely changed.

And while there are benefits, D`Angelo Harrison's 39% shooting inside the arc is just not good. Harrison shot 42% at the rim - lowest of any regular on the team and in the bottom quartile of all shooters in Division I.

He shot 31% on two-point non-rim jumpers, only better on St. John's than Rysheed Jordan and God`sGift Achiuwa.

But would making him a more sedate player who takes "good" shots take away the reason teams game plan against him?

Unlike players like Jakarr Sampson, who would take a shot in any open space (but only in open spaces), Harrison's madness does come with a method. Snaking into the paint with crafty moves, Harrison drew over 200 foul shots - and shot 86% at the line.

How to improve the shooting percentage, then, without giving up the aggression and craftiness that gets buckets from the line?

And while we're at it, how to make Harrison a steadier shooter from beyond the arc? He hit 37% of his shots from distance, but he also suffered two 0/5 nights, two 0/4 nights, a pair of 1/7 outings...

St. John's, this year, may need to be carried into the NCAA Tournament.

And D`Angelo Harrison and his backcourt mate Rysheed Jordan are going to have to be the players to do it.

The questions about D`Angelo Harrison

Can D`Angelo Harrison be Big East Player of the Year?

Given the role Harrison will have - a guard in a four-guard lineup, and the feistiest of the bunch - it's not hard to see Harrison finishing the year rebounding like a small forward, drawing even more fouls, and finding more consistency if his teammates find him.

He's been steadily improving his efficiency, lowering turnovers and improving his free throw shooting. But he could have a season Big East fans will remember for a long time.

Can Harrison stick to only the deadliest shots?

D`Angelo Harrison's two-point shooting isn't going to be great, but it can be better, more judicious. And if his teammates find him, he can be an incredibly strong sniper from the perimeter.

But if he has to create his own shots, dribble to his off hand, take off-balance jumpers just to keep St. John's within striking distance? Harrison is going to be the same player - very good, with some inconsistent shooting outings.

The emergence of Rysheed Jordan - if it happens - should draw some attention away from Harrison, assuming Jordan and others pass the ball to Harrison, camped out in the perimeter. As should the newfound offense of Chris Obekpa. Can they provide enough scoring punch to keep double teams off of Harrison?

This St. John's team will need smaller players to rip rebounds from forwards, for players to become dogged defenders, and will need some high energy efforts and strong starts.

D`Angelo generally brings his energy. But he has to lead this team in doing the same. There will be distractions, disgruntled fans, a bad loss or two.

But teams can overcome that with focus and effort, working to improve every day instead of worrying about the next level.